Standard White - 100%
“It takes a special kind of visionary to sit behind the wheel of a hypercar while it flirts outrageously with the sound barrier and seriously ask the question "Hey, wouldn't it be cool if we could put the top down?" But then the folks at Pegassi are nothing if not visionary, and nothing if not special.”

The Pegassi Zorrusso is a roadster hypercar featured in Grand Theft Auto Online as part of the continuation of The Diamond Casino & Resort update, released on October 24, 2019, during the Zorrusso Week event.

The Zorrusso assumes a long body with aerodynamic features around it, where the front end has a carbon-fibre extender on the lower side and inserts over the outer intakes, while the central intake is narrower and leaves a small gap below. The upper area features plastic housings with CFRP details below these, each one consisting of circular headlamps on the outer sides and five hexagonal lamps on the inner sides, while the bonnet area features small dual intakes on the front end and exit vents with plastic details near the windscreen. A small Pegassi emblem can be seen on the front.

The sides of the car make use of side vents and exit ducts on the fenders, while large intakes, upper slatted vents and side marker lights can be seen on the rear fenders. The middle section is slightly narrower than the rest of the car and features carbon-fibre side skirts at the bottom and inset areas passing throught the doors, intended to direct airflow to the aforementioned rear intakes. The greenhouse area is characterized by the open top, the carbon-fibre framings on the windscreen and the sleek mirror wings supported by carbon-fibre frames, while the rear section features CFRP details behind the seats and over the engine bay area, the latter also having small vents and a small glass pane for visibility of the engine.

The rear of the car is clearly distinguished by the numerous exit vents around the upper area. A set of rectangular lamps can be seen on the central vent, being a single third brake light and twin reverse lamps. The middle section has a carbon-fibre panel with a small Pegassi emblem on it and numerous red lamps that extend past the body, in a similar manner to the Thrax. The lower area mostly consist of a carbon-fibre bumper with a central vent on the centre and hexagonal exhausts on either side. A license plate can be seen in front of the rear vent.

The underside of the car is mostly carbon plated with an exposed rear axle, which seemingly conforms the front extender, the side skirts and the rear bumper. There is also an elevated section on the front that is part of the front gap, allowing the air to flow through the underside.

The interior of the car is reused from the FMJ, sharing the same dials and details around the dashboard. The carbon-fibre paddle shifts and the Pegassi emblem on the horn cap makes it identical to the interiors found in cars like the Tempesta and the Toros.

The primary colour of the vehicle is applied on the bodywork, while the secondary colour is applied on the mirror wings, engine cover, interior stitching and the detail around the rims. It uses a unique set of five-spoke rims with additional details in between, with a star-shaped centre.

The Zorrusso is comparable to the Krieger in having great top speed and traction. Acceleration appears to be slightly inferior due to the rear wheel drive layout, but is still good enough to propel the vehicle after slowing down considerably. Its handling remains good for taking corners, but braking is still needed to perform sharp turns. Overall, the Zorrusso is a well-balanced supercar.

The Zorrusso has one (the eleventh) Advanced Flag enabled.[1] The purpose of this flag is unknown, but it appears to have little impact on performance.

The Zorrusso has a mid-rear engine whose model is derived from the Itali GTO (albeit using the corresponding Pegassi badges), coupled to a 6-speed gearbox in a rear-mid engine, rear wheel drive layout. Although the model suggest a V-shaped engine, its exact configuration is unknown, as it has no manifolds or any detail that could infer the model (possibly intended to resemble the Zerouno's V10 engine). With the "Street Set Up" modification installed, the vehicle is fitted with two turbochargers. It shares the engine sound from cars like the T20 and the Tempesta. 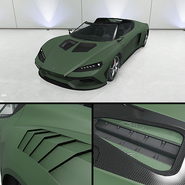 The Zorrusso on Legendary Motorsport.

The Zorrusso on the updated Rockstar Games Social Club.

The Zorrusso in a Cinematic preview on Rockstar Games Social Club.