Headquartered in the Downtown district of San Fierro, San Andreas, its building is one of the largest and distinctive in the district; featuring an accessible glass foyer and a colossal decorative sculpture shaped after a DNA strand at the center of the building. The corporate logo also represents a DNA helix.

The Zombotech Corporation attempts to soften its sinisterness and inhuman corporate image by posting the following inscription on its lobby entrance: "Zombotech Sinister Zombie Virus Research Corporation Welcomes Visitors!". However, no pedestrians can be seen walking inside the building lobby.

Towards the rear are elevators that lead to different levels of the building, with some marked as an entry to a zombie lab. One sign clearly shows an elevator shaft leading to an underground level that would presumably house the lab.

The headquarters is featured in the mission Jizzy, where Carl Johnson is ordered to drop off one of Jizzy B.'s girls in front of the building. During this mission, Jizzy claims that the building is a hotel, whether or not there actually is one operating in the building alongside the corporation or it is simply a mistake by the developers.

A Sparrow can be found on the roof of the building, although the roof is only accessible with the jetpack or an aircraft.

The large sculpture located at the center of the building

A sign indicating the presence of a "Zombie Lab"

A sign indicating the current floor, note the underground levels 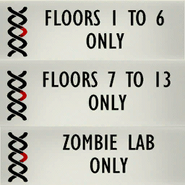 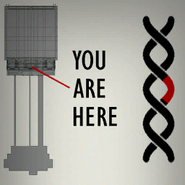 Retrieved from "https://gta.fandom.com/wiki/Zombotech_Corporation?oldid=1150768"
Community content is available under CC-BY-SA unless otherwise noted.