Zombie B (By Johnny)
Sexy Charlie (By Lester Arnold)

GTA IV & TBOGT
TLAD
For other uses, see Zombie (disambiguation).
“How can a bike be so stripped down it's souped up? So classic it's contemporary? So expensive it's cheap? We're not sure, but once you're hanging from its mini-ape bars like an orangutan with a leather fetish we're pretty sure it'll come sharply into focus.”

The Zombie resembles an Exile Hod Rod with a rigid body frame, as evidenced by the lack of a separate rear suspension module. The back of the bike is taken after a Harley Davidson Iron 883 with the fender and two tail lights. The only differences are the twin headlights, a "tribal" paintjob and the addition of a pillion pad to the Zombie.

The Zombie is a bulky motorcycle, featuring a telescopic fork with black details on it, dual circular headlights on the lower triple clamp and black elongated, "ape hanger" type handlebars connected to the upper clamp by two supports. The main body features a dual lower frame, a rounded oil tank and a black leather seat, while the engine bay features a circular air filter and exhaust pipes on the right side, coming from each cylinder block, along with foot pegs for the passenger. The rear section features a rear fender with a pillion pad over it, circular tail lights on either side of the main frame and thin frames holding the rear fender. The chain drive and sprocket are seen on the left.

The vehicle is set to spawn in a wide variety of primary colors for the fuel tank and rear fender, while the secondary color is applied on the front suspension forks, horizontal front frames, transmission cover, oil tank and wheels (which is always set to white). An additional color is applied onto the tires, which is always set on a white color (giving it the impression of whitewall tires). There is also a version that spawns in a full black color, as well as a red color on the tires (giving it the aspect of "Redwall" tires). The bike uses wired rims similar to the Freeway, with high-profile tires and wide track.

The Zombie returns in Grand Theft Auto Online as the Zombie Chopper with the same design, albeit with more detail. The exhaust manifold extruding from the front cylinder bank appears to be finished in chrome rather than the original brown color, while the tribal markings are no longer available. Like most motorcycles featured in the same update, it has protruding primary drive with an Atomic-branded belt, as well as a chain drive, which are fully animated.

Because of the rearranges in the color sets, the Zombie Chopper features a more organized color scheme: the primary one applies one the fuel tank, oil tank and rear fender, while the secondary one applies on the bodywork frames and the front forks (leaving the previously colored suspension forks, horizontal frames and transmission cover set to a default steel appearance). A tertiary color remains applied on the tires (also set to a white color). The rims have the same design as in GTA IV, being a derivative of the "Bobber" rims available in Los Santos Customs, but can support a dedicated wheel color, which can be painted by selecting a custom rear wheel, applying a color and change back to the stock wheel (as it won't reset to the default alloy color). It uses the same high-profile tires as in GTA IV, but a groove is also added down the center of the circumference.

While able to reach a good top speed, the Zombie's handling is rather poor due to the oversized front tire, and the bike is susceptible to oversteer, which make cornering difficult with the increased sweep caused by the handle arms. It can only do wheelies from high revs, and by transferring weight to the back before taking off. Its speed and braking, however, are superior to most motorcycles in GTA IV, compensating for its flaws.

The engine is a chain-driven, V-twin internal combustion engine with a 5-speed manual transmission, as evidenced by the foot-actuated gear shifter. It shares the same engine sound with the Freeway.

The Zombie Chopper is a very fast, nimble motorcycle for its style. Its large, heavy V-Twin engine still provides enough torque to keep it moving and even offers the vehicle a surprisingly high top speed, although the limited number of gears does appear to restrict the vehicle's potential, particularly evident by the red-line revs which are not flat in tone.

The Chopper's high steering bars provide decent steering capacity, and while not being as maneuverable as sports bikes, still gives the vehicle a massive advantage against cruiser motorcycles such as the Daemon and Nightblade. Moreover, the vehicle's suspension is some of the best motorcycle suspension in the game, giving the player a very smooth ride, making it much easier to use weapons against other players without trouble from the bike itself, and the relatively light body-weight makes the bike even easier to move around at both low and high speeds.

Again, the engine is a chain-driven, V-twin internal combustion engine with a 5-speed manual transmission, as evidenced by the foot-actuated gear shifter. The motorcycle shares the same engine sound as the Cliffhanger, being notably higher revving and higher pitched than the ones from the Nightblade and the Wolfsbane. 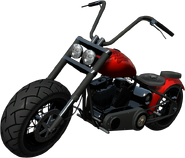 A customized gas tank on the Zombie. 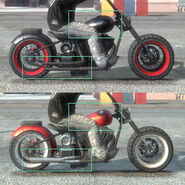 Different sets of exhaust and gas tank on the Zombie. 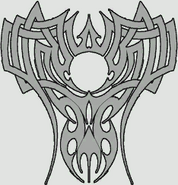 Tribal design on the Zombie motorcycle

As seen in an official screenshot for the Bikers update. 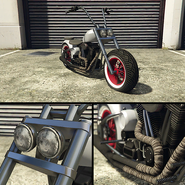 The Zombie Chopper on the updated Rockstar Games Social Club.

The Zombie Chopper in the cinematic preview on Rockstar Games Social Club.