"Opened to the public in 1930, the Zirconium Building is considered to be a classic example of Art Deco architecture. Whatever that means. It's another tall building with a spire. Take a photo and move on, you annoying tourist. Some people actually live here."
―Peep That Shit description.

Bordered by Columbus Avenue to the west, Bismarck Avenue to the east and Jade Street to the south, the Zirconium Building is an example of an Art Deco building[1] opened in 1930[2], according to Peep That Shit. [3]. It appears as a ~70[4] story building consisting of a large base which is comprised of 16 rows of 16 columns on its western and eastern sides, and large set-backs on the north and south faces. On the topmost corners of the base are sculptures which face out onto the street. The building then staggers up towards a large tower with 10 columns of windows individually separated by its concrete channels. At the very top, the building sets back one final time, where what appear to be observation decks or access decks are found on all four corners, accessed by doors (inaccessible for the player). Also found on the corners are gargoyle sculptures. Only several floors remain before being topped out with a large metal crown built on all four sides arched at the very top. The crown features triangular windows and, like the base of the building, gradually becomes narrower as it peaks. The top of the crown is capped with a spire.

The building appears to be addressed at 135, however since this address appears on multiple sides of the building, it is unknown which road it is intended to be addressed to. The number "3" cannot be seen in-game as 3D details cover it, however internal textures reveal it is indeed 135.[5][6]

Despite being a prominent member of the Liberty City skyline, it remains unmentioned in the storyline of GTA IV and is only named on the Peep That Shit tourism website. Its unperceived nature is similar to the fashion of the real-life Chrysler Building in New York City, the building the Zirconium Building reflects, being comparatively less-popular when compared to other landmarks of the city[7]

While its usage isn't mentioned in its Peep That Shit description, the name of the building suggests it is affilated with Zirconium, a vehicle manufacturer in GTA IV and GTA V. This would reference the real-life Chrysler Building's former use as the headquarters for the Chrysler Corporation.[8]. In-game, however, Chrysler appears to be emulated as Schyster, given a number of their vehicles resemble real-world Chrysler vehicles.

Like the real counterpart, the Zirconium Building stands out among surrounding skyscrapers and is closely rivaled with the neighboring GetaLife Building in Easton, similar to the nearby relation of the MetLife Building and Chrysler Building in real-world. The Triangle Tower and Triangle Building are also close by.

Its total height, including or excluding its spire, places it as the second tallest building in Liberty City, beaten by Rotterdam Tower in Rotterdam Hill but surpassing the Bawsaq Building in Star Junction.

The building also appears in Grand Theft Auto: Chinatown Wars, however, only the base of the building is visible due to the "top down" perspective.

The Zirconium Building is based on the Chrysler Building located on Manhattan, New York City.

Niko Bellic with the Algonquin Bridge in the background. The Algonquin skyline lights up in the distance.

A Dinghy blasting down the Humboldt River. The Zirconium Building can be seen in the background.

Niko being pursued by the LCPD in Star Junction, with the Zirconium Building in view.

An Annihilator flying through Star Junction.

The building seen on the right as seen from Broker Navy Yard.

An Annihilator flying along Columbus Avenue.

Low angle of the Algonquin Bridge with the Zirconium Building peering out of view on the left.

Ditto, with Niko in the foreground.
Add a photo to this gallery

As seen from Columbus Avenue.

Looking from the corner of Jade Street and Bismarck Avenue. 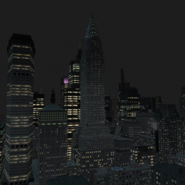 As seen at night.

The building's crown and spire at night.

Looking from the north.

As it appears in the Liberty City skyline.

Looking up from the side street north of the building.

Gargoyles on the top of the building.

The main entrance of the building in Grand Theft Auto: Chinatown Wars.
Add a photo to this gallery

Retrieved from "https://gta.fandom.com/wiki/Zirconium_Building?oldid=1165489"
Community content is available under CC-BY-SA unless otherwise noted.