The Zion Cabrio is the convertible variant of the Zion. The car reuses the same bodywork of its coupé counterpart, except that it features a retractable roof made of textile fabrics, which folds up in one piece, unlike other vehicles where each section of the roof retracts in pieces. Unlike the standard Zion, the carbon-fibre components were replaced by body-coloured ones, resulting in a more uniform colour scheme. The vehicle reuses the same badging as the Zion, but the "XS" part is omitted.

Colour distribution is the same as the Zion, where the body and the interior stitching are painted with the primary colour. The wheels are similar to the "Split Ten" high-end rims available in Los Santos Customs, wrapped in low-profile tyres.

The Zion Cabrio has an average performance line, having exceptionally quick handling & turn cycle, good braking distance, but poor engine performance. Its main issue is its acceleration, as it is among the slowest of the Coupes class. It can take around 13 seconds to reach a speed of 60 mph, according to the first person dashboard speedometers. Deformation is also quite appalling, taking only several offset head-on crashes to make negative cambers on the wheels, slowing the car down, and majorly affecting steering and braking.

Like the standard Zion, the Zion Cabrio is powered by a twin-cam, four-cylinder engine fitted with a turbocharger, coupled to a 6-speed gearbox in a front-engine, rear-wheel-drive layout. Its engine sound is also shared with the Zion, being a lower-pitched, smoother variation of the one used in the Sentinel.

Zion Cabrio with the convertible roof up. (Rear quarter view)

Zion (grey) and Zion Cabrio (blue) beside each other to show differences. 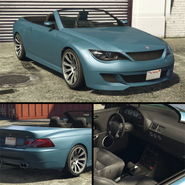 The Zion Cabrio on the Rockstar Games Social Club.

The Zion Cabrio on the updated Rockstar Games Social Club.