Yes
“A German beauty of timeless passion and sleek design. When you're interested in class and an overpowered engine, there is no other choice.”
— Southern San Andreas Super Autos description.

The Zion appears as a vehicle similar to the Sentinel and the XS variant, but has a longer wheel base and extended rear. The front end is very similar to the Sentinels in the layout of the components, but the trapezium-shaped grille does not feature a chrome trim around. The lower intakes appear to be slightly smaller and narrower than those of the Sentinels, while two carbon-fibre lips can be seen at the bottom edges of the car. Unlike the Sentinels, the license plate is mounted below the bumper line, almost over the central intake. The bonnet is relatively flat and features the manufacturer emblem on the front.

The rear of the car is mostly identical to the Sentinels in layout, but the boot is somewhat larger, the upper lip is much larger and the tail lamps have a more traditional appearance. The bumper is also identical to the ones on the Sentinels, but has a vented section on the centre and the exhausts are located within the carbon-fibre diffuser. The Zion features similar badging to that of the Sentinel XS, albeit featuring its own "Zion XS" badge.

The Zion is only painted with a primary colour, which also affects the interior stitching. The wheels are identical to the "GT One" sport rims available in Los Santos Customs, wrapped in low-profile tyres.

The Zion has an average performance line, having a good handling and turn cycle, a good braking distance, and an acceptable top speed. Its main issues are to do with its engine, as its acceleration is among the worst of the Coupes class. It can take around 13 seconds to reach an average speed of 60 mph. Deformation is also quite appalling, taking only several head-on crashes to make negative cambers on the wheels, slowing the car down, and majorly effecting steering and braking.

The Zion is powered by a twin-cam, four-cylinder engine fitted with a turbocharger, coupled to a 6-speed gearbox in a front-engine, rear-wheel-drive layout. Its engine sound seem to be a lower-pitched, smoother variation of the one used in the Sentinel.

Zion (grey) and Zion Cabrio (blue) beside each other to show differences. 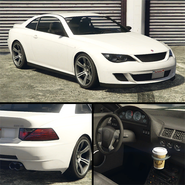 The Zion on the updated Rockstar Games Social Club.

The Zion in the cinematic preview on the Grand Theft Auto V Rockstar Games Social Club.

The Zion in the cinematic preview on the Grand Theft Auto Online Rockstar Games Social Club.