Standard White - 100%
“Alien invasion, the undead rising, hordes of liberal arts students. Whatever threatens your way of life, make sure you have the upper hand with the Rune Zhaba, the perfect vehicle to raise you up above it all. Whether you're grinding bones or crushing hope, Warstock has you covered.”

The RUNE Zhaba is an all-terrain vehicle featured in Grand Theft Auto Online as part of the continuation of the The Diamond Casino Heist update, released on January 2, 2020, during the Zhaba Week event.

The Zhaba was initially featured as a mission-only vehicle in the "Getaway Vehicles" preparation and later used as a possible getaway vehicle in the Casino Heist. However, as of the Zhaba Week event, it became available for purchase.

The Zhaba is evidently based on the SHERP ATV, seen in the overall appearance and large wheels.

The vehicle features a cube-shaped appearance, where the front end is slightly angled and has a small front compartment, a set of square lamps below the windscreen and the RUNE logo between the headlamp units. The windscreen is rather large and features two black wipers.

The sides of the vehicle feature bulky fenders and side steps for access, as well as large access doors with rectangular windows, large windows on the front quarters, ladder bars on the left side and side panels (which can be opened via the Interaction Menu). The roof features a LED floodlight bar similar to that of the Riata, the Kamacho and the Barrage, along with hatches on the passenger side and the rear compartment. Additional ladder bars are also seen on the left side, as well as large vents beside the rear roof hatch.

The rear end is composed of two large doors with rectangular windows and a large access step, as well as large vents beside the rear doors and a downward-pointing exhaust tube on the passenger side. The vehicle also features rectangular tail lamps identical to the ones from the Scarab, while the RUNE badge is visible next to the passenger-side tail lamp. A number plate is seen below the doors.

Its interior reuses the same dials and dashboard layout as the Scarab, having digital displays and numerous switches around. However, there is a RUNE logo on the steering wheel. The rear compartment is similar to the ones from the Stockade and Police Riot, being a dark grey interior with bench seats on either side.

The primary colour of the vehicle is applied on the bodywork, while the secondary colour is applied on the hinges and handles of the doors and the hatches, as well as the suspension springs and the details on the axles. The vehicle features large wheels with high-profile tyres, which have knobby treads that double as pallets when going over water.

Upon entering the Zhaba’s front compartment, the driver will briefly pause to close the front-end doors through using the switches on the dashboard, then start the engine.

The vehicle is rather slow for its size, taking a while to get up to speed. Acceleration is rather low and its top speed is relatively low too, being outrun by many armored vehicles similar to it. It has a short wheelbase, allowing it to turn sharply at low to medium speeds. The vehicle does not have much traction so this causes it to spin out when making sharp turns and when it is struck by some vehicles. Braking is good, taking a short distance to stop the vehicle completely.

The Zhaba's weight is surprisingly light for its type, and this gives the vehicle poor ramming capabilities. The light weight also makes it vulnerable to being pushed around by many vehicles such as SUVs or large vehicles. This makes sorting out traffic problematic, especially if it is on the freeway. Missiles from enemies can push it around as well, making escape and recovery difficult.

The Zhaba handles well offroad, with its large tyres and suspension allowing it to sort small rocks and low barriers with ease. It also fairs well going up mountains, but going up steep slopes is a lost cause, as the engine power is not enough to keep it going on steep slopes. Large rocks or obstacles are to be avoided as they can stop the Zhaba completely.

The Zhaba also has amphibious capabilities, allowing it to traverse water. Top speed and acceleration are low, making it slower than the APC and other boats. Turning is fine and braking is good as well.

The Zhaba seems to be powered by two engines located on either side, evidenced by the location of the vents and fact smoke comes from the panels when severely damaged. It has a 5-speed gearbox and an AWD layout (40% front, 60% rear), as well as a diesel engine sound shared with trucks like the Phantom Custom, the Hauler Custom and the Chernobog.

While the "Rack" modifications are technically spoilers, they do not offer increased traction due to a flag that prevents this change. [2]

The Zhaba is resilient against bullets, allowing it to sustain large amounts of gunfire especially with Armor upgrades. Resistance to rockets is good, taking around 14 Homing Missiles to destroy it. The windows are semi bulletproof, taking several shots to shatter them unless the enemy has FMJ rounds.

Overall, the Zhaba is well suited for combat but the aforementioned speed and weight make it a rather unsuitable choice for vehicle chases and when the enemy has access to missiles, which can push the vehicle around.

* Vehicle is limited to Tire Smokes. Bulletproof Tires are installed as standard. 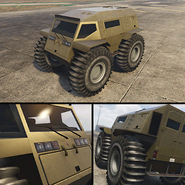 The Zhaba on Warstock Cache & Carry.

The Zhaba in the cinematic preview on Rockstar Games Social Club. 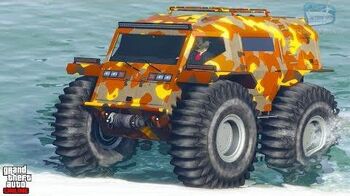 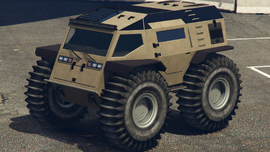 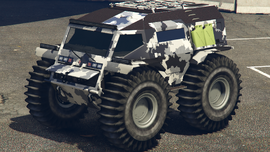