“A supercar that’s as aerodynamic as your corporate pipeline, and as savage as the abuse you hurl at your subordinates.”
— Career Builder description.
“Make sure the other 99% know you're in a vehicle they can't afford with this loud, brash, in-your-face supercar from Pegassi. Insanely fast with a high-tech interior, this is as close as you can get to a fighter jet on wheels. The only thing that goes up quicker than the 0-60 on this bad boy is your insurance premium.”
— Legendary Motorsport description.

The Zentorno is designed as an exotic high-performance vehicle, with very aggressive styling cues and a low, sloped body for added aerodynamic effects. The front end is largely dominated by the numerous intakes, separated by carbon-fibre frames. The bonnet area features four small intakes on the centre and two triangle-shaped details over a carbon-fibre portion near the windscreen. The frontal area features two headlights located in black housings, as well as the manufacturer's emblem located between the lights.

The sides of the car denote its aerodynamic profile, featuring concave details above the skirts and inset portions on the doors, together with vertical intakes on the rear fenders and diagonal body lines. Like the Infernus, the Zentorno features scissor doors with rounded mirror shells near the cabin A-pillars. However, these doors do not rotate away from the vehicle body, giving it realistic mechanics. The greenhouse area features coloured front separations behind the A-pillars and carbon-fibre panels on the rear quarters, while the area behind the cabin has two roof intakes leading to the engine bay, two rows of six hexagonal vents on the centre, small vents on the sides and two more vents over the rear tail lamps, finished in carbon fibre.

The rear of the car is predominated by carbon-fibre elements, being the bumper, diffuser, and the separations on the rear vents. A set of red LED strips can be seen on the upper side, with the car's name embossed in chrome letterings between these lights and the two hexagonal exhaust tubes at the bottom. The underside of the car is mostly carbon-plated, with exposed front axle arms, gearbox/diff and rear axle.

Its interior and dial set is shared with the Vacca, itself being a derivative of the one from the Banshee with yellow dials instead of blue. The manufacturer emblem can be seen on the horn cap.

The car is prominently painted in a primary colour for the body, while the secondary colour is applied on the front bumper trim, the triangle-shaped details on the bonnet area, the lines seen on the vents and around the hexagonal vents on the engine bay, the rear bumper trim and the tyre details of the stock wheels. The car has 10-spoke rims with an angled detail on the ends and a blacked-out appearance.

Surprisingly, the Zentorno is very competitive with high-end supercars such as the RE-7B and Tempesta around a normal circuit due to its superb cornering speeds. It can also reach fairly high speeds, making it faster than the Entity XF, Turismo R, Infernus, and Cheetah. The hybrid engine in the Zentorno delivers incredibly smooth and alarmingly quick acceleration. In fact, the base stats of the car made it the fastest accelerating supercar in the game (possibly on par with the Voltic). The car features non-adjustable suspension that is about equal to, if not lower than Competition level, and because it is so close to the ground, the car cannot climb stairs (both forwards and backwards) and can also flip very easily when colliding with sidewalks.

The vehicle's handling is extremely responsive, as it can take corners at high speeds with relative ease due to the lowered suspension and the good weight distribution. But due to the car having such a sensitive handling, It can become a deficit more than a benefit for people using a keyboard as it will turn at 100% power. The high-output engine may also become difficult to control for inexperienced drivers. The vehicle has very minimal oversteer, but it can still spin due to its handling power, but does not always lose control too easily.

The Zentorno's grip can also become a big problem when driving on bumpy roads, if two or more wheels lift off the ground (even for a second), one (or more wheels) will still make such strong contact with the ground for the car to enter a spin. However, the four-wheel drive layout lowers the risk of this, and usually "fixes" itself back into driving forward, picking up speed on the way.

Although no physical engine model exists in-game, the website stated that the Zentorno is powered by a 6.8 liter V12 engine that produces 750HP, which is somewhat reflected by the number of hexagonal vents on the rear (similar to how the Sesto Elemento is powered by a V10 engine and features exactly ten hexagonal vents). It has a 6-speed gearbox and an all-wheel drive layout (30% front, 70% rear distribution). The engine sound is typically high-revving, shared with the Cheetah.

A custom Zentorno in the enhanced version of GTA V. Note the neon underglow and license plate. 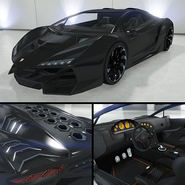 The Zentorno on Legendary Motorsport in the enhanced version of GTA V.

The Zentorno on the updated Rockstar Games Social Club.

The Zentorno in a Cinematic preview on Rockstar Games Social Club.

The Zentorno as seen in a pre-release screenshot. Note the absence of the badge.

Promotional artwork of the Zentorno. 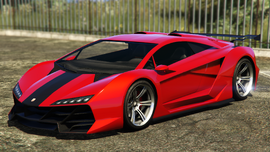 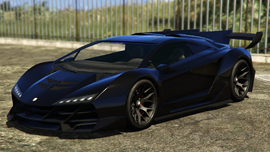 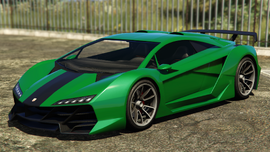 Pre-modified variants of the Zentorno can be seen driving around Los Santos randomly. Business DLC Sports Modded 1 has a unique primary color not available in Los Santos Customs, Beeker's Garage or any other vehicle mod shop. 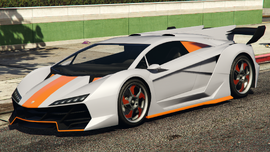 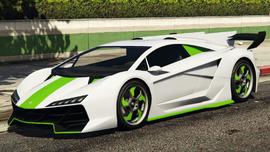 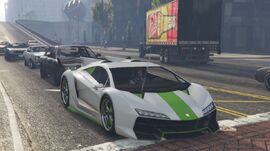 Like the randomly spawning modified Zentornos, two sets of Zentornos may spawn outside Los Santos Customs, pre-modified. These again only spawn in single player. The vehicles appear in set color sets with the same modifications. They will not spawn with any of the default extra components. These variants are named "LS_CUSTOMS_MODDED_SP" and use the exact same modifications and colors as the Business DLC Sports Modded sets. 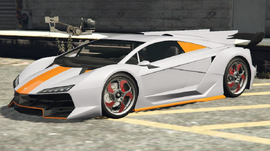 An NPC-modified Zentorno in the enhanced edition of GTA V. (rear quarter view)

The Zentorno is part of three vehiclemodelsets, "LS_CUSTOMS_MODDED_SP", "BUSINESS_DLC_SPORTS_MODDED_1" and "BUSINESS_DLC_SPORTS_MODDED_2". The first allows heavily modified Zentornos, among many other modified cars to spawn outside Los Santos Customs, as well at other locations. The second two allow the Zentorno and other Business Update sports cars to spawn modified in specific locations, particularly around the city. They only spawn in GTA V.