Standard White - 100%
“The torque-loaded Överflöd Zeno is famous for breaking two world records. The first, highest speed in a densely populated area. The second, most hospitalizations during a single attempt to break a world record. A real highflyer in every sense.”
— Legendary Motorsport description.

The Överflöd Zeno is a two-door hypercar featured in Grand Theft Auto Online as part of The Contract update, released on December 23, 2021, during the Festive Surprise 2021 event.

The design of the Zeno is heavily based on the SSC Tuatara, with the sides and the swept back design being derived from the McLaren Speedtail. The rear is clearly inspired by the Bugatti Divo, albeit with tailights which are most likely influenced by those of the Hennessey Venom F5, and the triangular exhausts being taken from the newer versions of the Tuatara. The front grille seems to bear a resemblance to the Pagani Huayra, while the mirrors are borrowed from the Apollo Arrow.

The front of the car assumes a wedge shape and features a CFRP section at the bottom and a meshed intake above, which spans most of the car's width and has two vertical separations in the centre. The upper area of the car houses a set of modern headlamps on the edges, each one consisting of C-shaped outer strips and trapezoid-shaped inner units, with the upper ones being the amber indicators. The bonnet area is mostly dominated by the boot lid, which has smooth ridges starting from around the centre and leading towards each side of the cabin, as well as the manufacturer emblem at the front. Said boot lid hinges from the front and opens to reveal a small luggage compartment, a CFRP finish around it, and black sections over the headlamp housings, along with what looks like two end caps.

The sides of the car are mostly dominated by upswept shapes that pass through the doors and house small exit vents near the front wheels, while small openings can be seen on the skirting area and upper intakes are seen past the doors. The roof and pillars of the cabin area are finished in black, while the doors pivot from the upper frontal edges of the vehicle and house narrow mirror wings and discreet handles. The rear section of the car features curved lines leading to the centre and a black section behind the cabin that houses the rear window. This rear section also serves as a clamp that hinges from behind the cabin area and opens to reveal the engine bay, a CFRP finish with a black surrounding area and two small vents continuing from the upper intakes of the side, as well as a single shock/spring, two articulated bars and the chassis frames.

The rear end of the car is mostly predominated by three large meshed vents; an upper one spanning the entire car's width and two lower ones on the edges that are divided by a CFRP separation. Within the upper vent, there are large tail lamp strips divided between the brake lamp in the centre, two small reverse lamps in the middle, and large main/turning lamps on the edges, while the number plate can be seen below the central brake lamp. On the lower area, the car has a CFRP diffuser with three triangle-shaped exhausts in the centre and a smaller meshed vent below, while the underside of the vehicle is mostly carbon plated, with the rear gearbox/diff exposed. The interior is shared with vehicles such as the X80 Proto, the Vagner and the Visione, bearing the manufacturer badge on the horn cap.

The primary colour of the vehicle is applied to most of the bodywork, the spring on the engine bay and the interior stitching, while the secondary one is applied to the portions below the headlamps, the rear-view mirrors, the upper surfaces of the lower rear exit vents, and part of the rims. A trim colour is also available for the interior, applied to the dashboard, part of the doors and the inner portions of the seats. The car uses a set of six-spoke split rims with bolt details around the centre, which are mostly finished in black, wrapped in low-profile tyres.

The vehicle is powered by a V-shaped engine appearing to emulate the V8 engine from its real-life inspiration, powering the rear wheels through a 7-speed gearbox. Its engine sound is similar to the one on the Emerus, being an edited version of the Cheetah and Vacca engine sounds.

A Zeno in the Time Trials advert during the Imani Tech Week event. 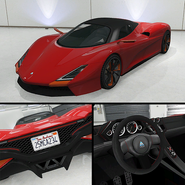 The Zeno on Legendary Motorsport.

The Zeno in the cinematic preview on Rockstar Games Social Club.