"Welcome to one square mile of high fences, barbed wire, juiced up marines and heavy ordinance. If you want to make your continued existence something to really boast about, this is your chance."
―Description

Zancudo Survival is a Survival job in Grand Theft Auto Online as part of the continuation of the The Diamond Casino & Resort update, released on September 26, 2019, during the Survival Series Week event. It takes place in Fort Zancudo.

The enemies are Military personnel. Their vehicle of choice to arrive in during later waves is the Barracks, with them also using Cargobobs on certain waves.

As this part of Fort Zancudo does not normally provide much cover, a large amount of props, mostly cargo boxes, are scattered around the area, which should be used for cover. The boxes are sometimes stacked, meaning the player can get a slight height advantage over the enemies.

The map is completely flat, which makes it easier for the players to shoot enemies. However, players may find this mission to be harder than some other maps, as the enemies come from almost all sides of the playing area.

Health pack at the east corner of the map.

Health pack at the west corner.

Armour pickup at the south corner.

Armour pickup at the north corner. 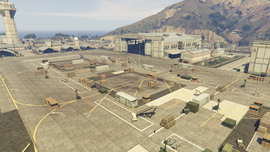 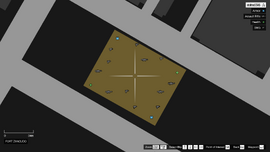 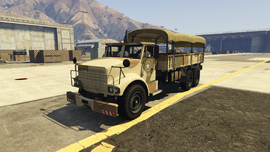 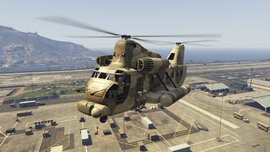 Retrieved from "https://gta.fandom.com/wiki/Zancudo_Survival?oldid=1190016"
Community content is available under CC-BY-SA unless otherwise noted.