“Weather the new Great Depression with a car from the last Great Depression. When this rolled off the production line in 1937, minorities and women knew their place. It was the world's fastest automobile. Now it's the world's most expensive second-hand automobile. One of only 10 ever made, the Z-Type is a car you can really enjoy sitting in, surrounded by armed guards, too terrified to actually drive it anywhere.”

As a Zaibatsu Corporation main car, the Z-Type comes in a black colour with the Zaibatsu's emblem on the roof.

Made by Truffade, the Z-Type retains its basis on the 1937 Bugatti Type 57SC Atlantic, but now uses styling cues from the 1937 Talbot-Lago Type 150 CS.

Design-wise, it remains identical to its previous iteration, being depicted as a sleek classic coupe with a long front and curved profile. The front end consists of a chrome slanted grille, featuring two circular lamps besides it.

The front fenders are bulky and elongated, having chrome trims running to where they end, just below the doors, while the rear fenders are also bulky, but shorter in length. The cabin features split front and rear windows and has curved door windows, along with chrome trims around them and chrome door handles.

The rear of the car is very curved, featuring circular tail lamps and a license plate. The circular boot with the chrome details and badge serves as storage for a spare tyre. Across the whole car, there is an elevated formation/separation that starts from the grille and ends on the rear end, leaving a small space for the circular boot.

Being a classic 1930s sports car, the interior of the Z-Type makes use of wooden panellings for the dashboard and the rear section, as well as wooden trimmings on the inner door panels. Part of the driver-side dashboard contains a steel plate surrounding the main gauges. The passenger side contains a glovebox, with the Truffade logo on the bottom-right corner of the same. Leather stitching can be seen on the door trims and part of the inner door panels.

The vehicle is painted with a primary colour on the body and the secondary colour on the curvatures of the bonnet area, rear fenders and lower rear. The car shares the same rim design as the JB 700, being a derivative of the "Wired" lowrider rims available in Los Santos Customs.

According to Devin Weston and the Legendary Motorsport website, only ten Z-Types were manufactured.

The car is very fast, having a high top speed, excellent acceleration, and immense traction. Despite the pros, the car's handling is prone to oversteering; an inexperienced driver can lose control of it very fast if care isn't taken. On the other hand, the braking is well above average. It's engine noise is shared with the Meteor, Trance AM, Miara and many others.

The Z-Type has a very characteristic handling, with a high top speed and excellent acceleration, but is very prone to tailspins and can be difficult to control. However, in the hands of an experienced driver, it can be a useful getaway car, especially in timed missions.

Performance of the Z-Type remains similar to its previous iteration. Speed is its strong suit — the massive V12 engine is capable of powering the vehicle up to an impressive top speed of just over 126 mph, narrowly outperforming the Monroe and, contrary to popular belief, the Adder. This makes it the fastest car among those included in the game at launch, and it has remained the fastest of its class.

The car handles as one would expect from a large, classic grand tourer, being able to calmly accelerate and easily weave through light traffic. Due to its poor weight distribution and soft suspension, cornering ability is rather poor at high speeds. It is prone to oversteer, leading to sudden and unexpected spin-outs, and counter-steering is extremely difficult. Despite its outstanding straight-line performance, these traits make the Z-Type mostly unsuitable for Sports Classic racing.

The vehicle is powered by a V12 engine with single-overhead camshafts and 6 double-barrel carburetors. It is coupled to a 4-speed gearbox, in a front-mid engine, rear-wheel-drive layout.

The Zaibatsu Corporation Z-Type in GTA 2.

An unmarked Z-Type in GTA 2.

The Zaibatsu Z-Type in the GTA2 GBC port.

A pre-release screenshot of the car.

A Z-Type being chased by an Interceptor in the enhanced version of Grand Theft Auto V.

Unused Z-Type badge from the textures of the car carrier Trailer from the Pack Man mission. 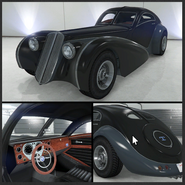 The Z-Type on Legendary Motorsport in the enhanced version of GTA V.

The Z-Type on the updated Rockstar Games Social Club.

The Z-Type in the cinematic preview on GTA V Rockstar Games Social Club.

The Z-Type in the cinematic preview on GTA Online Rockstar Games Social Club.

Vintage poster advert for the Z-Type.

Lucky Wheel advert for the Z-Type.

Z-Type badge from the advert.

3 heavily modified variants of the Z-Type may appear in Vehicle Cargo source missions. Each variant has a unique license plate number, colour combination and different set of bodywork modifications. 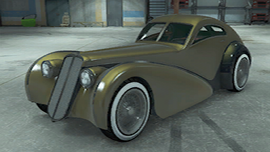 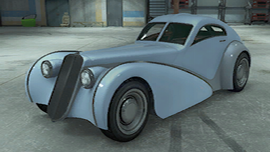 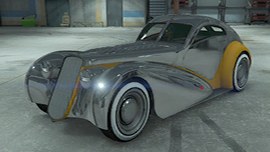