In-game time
“Alright, alright. Nice to meet you too. Come to the casino okay? You better be serious about this shit. 'Cause I can get you wherever you need to be to rob this place. No one says no to Yung Ancestor. But I'm gonna need your help first, see? Like, I had this accident. The kind that can put you away for fifteen to life. It's not cool. That's my career... I mean, I'm not singing in those fucking showers. Shit. Get here.”
— Yung Ancestor's briefing.

Yung Ancestor informs the player that he will help them with the heist if they first help him get rid of some evidence from his "accident" by taking a dark blue rental Fugitive and destroying it. He will first direct the player to dump the car in the Land Act Reservoir, but will call later acting panicked and paranoid, claiming a helicopter is outside his room, and directs the player to an abandoned lot in El Burro Heights to burn the car. However, when the player starts to get close to the destination, he will call again and send the player to a car scrapyard to crush the car, but then he calls yet again to request the car be taken to the Altruist Camp and let the Altruists handle it. If the player does not follow his directions and destroys the car by other means, the mission will fail.

When the player approaches the camp, Yung Ancestor will tell them to hurry since the "hill people are crazy". The player must not drive recklessly when inside the camp or the Altruists will attack them. After parking the car at the cult leader's home, the trunk will open to reveal a dead body, and the player must leave quickly to avoid confrontation.

“Okay, okay, okay... you gotta move fast, I swear the maid was about to break down the door. How does a four-foot Mexican lady bang that loud? Anyway, I put something down in the parking lot for you. It's in the back of a rental car, and you gotta help me get rid of it.”
— After arriving at the Casino.
“You got the car yet? Just get it away from the hotel, like, get rid of it. Like, I dunno, just... drive it into some water. Sink it. Fuck, you hear that? Is that a... I think some fucking chopper's outside my room. Fuck.”
— After obtaining the rental car.
“They're watching me And I think they're listening. Look, they'll be waiting for you... we got to rethink this. Take it up to El Burro... quick burn it. And torch the car before they find you. Good luck.”
— While approaching the reservoir.
“Hey no, no, change of plan, we burn the thing, every cop in the city will see. So many choppers, they're everywhere. You got to take it to the car crusher.. in the scrap yard. Go.”
— While approaching the abandoned lot.
“No, no, shit... What if they smell something> Like a dog or shit... My Doberman was going crazy, scratching at that door. Wait, what's that? I know you're listening... The people in the hills will help us. Take the thing to them. They'll handle it.”
— While approaching the scrapyard.
“Alright... now, you're getting close. These hill people're crazy, okay? I mean, real crazy. Just drop the ride and get the hell outta there... you don't wanna get into no unnecessary confrontation. Oh, shit, shit! Shit, where's that chopper?”
— While approaching the Altruist Camp.
“I swear, if that chopper come by again, I'm going to shove a rocket so far up its... Hey, is it done? Okay. Cool, cool. I owe you for that. Whole thing's got me so amped up. A real fucking heist I'm getting into it... I owe you, okay? But not that much, not yet. Let's speak soon. Might have something else to throw your way.”
— After completing the mission.

Rental car used in the mission. 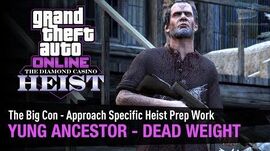