In-game time
“Hey, hey. Where you at? I got some folks up here in the penthouse... it's getting kind of wild in here, crazy shit, it's just... some of these dudes don't feel right... they aren't joining in. Get here soon, you and meel can talk to 'em. This the last thing, then I owe you one.”
— Yung Ancestor's briefing.

Yung Ancestor: After Party is a prep mission featured in Grand Theft Auto Online as part of the The Diamond Casino Heist update. It is a freeroam mission needed to progress The Diamond Casino Heist. This mission can only be accessed if the player visits the roof terrace of the Casino during Setup: Casino Scoping, and if the player has already completed Yung Ancestor: Dead Weight. Completing this mission allows the player to choose Yung Ancestor as their entrance disguise in the The Big Con Approach.

Yung Ancestor informs the player that there are sketchy people at a party he is holding as it penthouse and to come to the casino. However, as the player approaches the casino, Yung Ancestor calls again to say that he was right, and that the sketchy guests were actually paparazzi and have photos of his party, and the player must destroy the evidence. There are four photographers scattered around the map: One on a PCJ 600, one driving away in an Asbo, one at The Motor Motel in Harmony, and one at the Kortz Center. Players must either kill or knock out the photographer, then shoot their camera to destroy the evidence. Once completed, Yung Ancestor says he's ready to help the player with the heist.

“Shit, I was right! The motherfuckers had cameras. Who knows what they got! I cannot have those pictures coming out. I'm a role model. I do cereal commericals. I'm the brand ambassador for a luxury sedan! Shit! Alright, security just chased 'em out. Get over here... and delete those bitches... permanently.”
— While approaching the Casino.
“How you doing out there? I'm booked on a kids show tomorrow. That's going to be awkward as shit. You taken care of it? Okay. Wow. I guess I really do owe you one. I'm ready to deliver. Lock and load, whenever you're ready, just let me know.”
— After completing the mission. 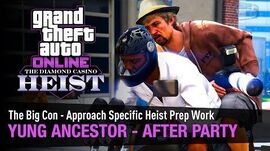