Yung Ancestor is a rapper who appears as a character in Grand Theft Auto Online as part of The Diamond Casino Heist. He is voiced by Danny Brown, who also appears as the host of iFruit Radio.

At some point after The Diamond Casino & Resort opened, Yung leased one of the penthouses to live in and work on an album, along with his Doberman Pinscher. He hosted several wild parties, at which it is hinted that cocaine was available. By this time, he had become what he describes as a 'role model', doing product promotion in breakfast cereal commercials, and being the brand ambassador for a luxury sedan. His public image was such that he could be booked for appearances on children's shows, and so keeping his private life away from the public eye, and particularly the truth about his parties became very important to him.

However, at his most recent party, there was an "accident" which involved massive blood loss and resulted in someone's death. Yung apparently stashed the body initially in a room in the penthouse, at which his dog 'went crazy' scratching at the room's door. He still managed to keep the body from being discovered by the hotel staff, although housekeeping still had to deal with the blood; when questioned on it, Yung claimed that since there was no body found, no crime had taken place. Management would later request that Yung tone down his parties. After the Duggan Crime Family bought the Diamond from Cheng Family Holdings, they began reviewing Yung's lease.

At some point, Yung managed to relocate the body into the trunk of a rental car without being seen. His involvement with the death isn't clear, but he mentions that he didn't commit any murders that can be proven, and considered the incident serious enough to be sentenced from 15 years to life imprisonment.

The first time the player takes the elevator up to the roof terrace of the Diamond Casino after the update, a cutscene will play introducing Yung Ancestor. Exclaiming that the party "sucks", he goes on to announce an afterparty in his penthouse and starts picking people to let inside. Among them is Brucie Kibbutz, but the protagonist is not invited. The protagonist continues to look on as Tom Connors hurries over when Yung shouts for guest services and asks for three bottles of tequila, a ballpoint pen, and demands a wall mirror the employees keep returning to its proper place to be "put back on the table". Tom agrees but tries to tactfully remind Yung that he was asked to tone down his parties after the last one, the aftermath involving housekeeping being disturbed over "all that blood" they had to clean up. Yung argues that just as he stated the last time about that incident that there was no apparent body, therefore no crimes had taken place. Tom states that Yung is aware that the Duggans are reviewing his penthouse lease and he just doesn't want there to be a problem for the rapper, but Yung gets upset and claims he was told that the VIP access he got with the penthouse meant "anything goes". After Yung irritably snatches the bottle of Blêuter'd champagne Tom is carrying on a tray and storms off after his guests to the penthouse owners' entrance, Tom radios Agatha Baker that they need to talk, and "yes, it's about that guest... again."

In order to get Yung to help, the player must first help him get rid of the evidence of his "accident" in a blue rental car with a black license plate, and then, later on, chase down and destroy all of the cameras that the paparazzi used to take photos of one of Yung's parties they had managed to infiltrate. Once that's pulled off, Yung will work with the crew during The Big Con approach. Here, he and Brucie meet up with the crew outside Agatha's office and convince Debbie to tell Thornton Duggan to meet them. Once she leaves however, Yung feigns panicking, saying Debbie knows what they're up to and blaming Brucie for it before pulling out a pistol and shooting Brucie in the leg. As Debbie walks out of Ms. Agatha's office and helps Brucie get to a doctor, Yung quickly leaves the scene and let the crew continue on their own from here.

His custom Furia (ANCESTOR) which is usually seen parked in the casino parking garage can then be used as a getaway vehicle in the heist, unlocking its discounted price at Legendary Motorsport. 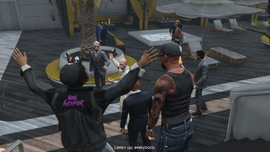 Introductory cutscene on the casino terrace. 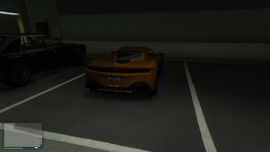 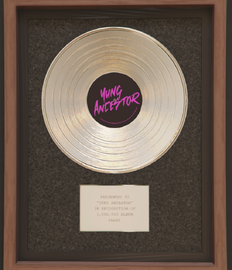