Yukon is a tobacco chew in Grand Theft Auto Online added in the Arena War update.

Yukon tobacco can only be seen advertised inside the Maze Bank Arena in the Arenawar gamemode in Grand Theft Auto Online, where it ban be seen on the animated ad screens and the static perimeter boards. The company has a mascot which appears to be a neanderthal wearing a Yukon branded cap. Yukon is very likely based on the Husky moist snuff tobacco brand owned by the U.S. Smokeless Tobacco Company. 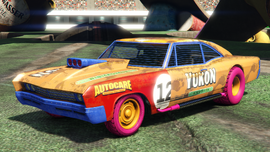 Yukon livery for the Nightmare Impaler.
Add a photo to this gallery

Retrieved from "https://gta.fandom.com/wiki/Yukon?oldid=1160761"
Community content is available under CC-BY-SA unless otherwise noted.