Standard White - 100%
“Ah, the late 60s, when utility was cool and this thing was affordable. You could never tell if the back contained a hemp-covered den of equality and recreational drug use or a mobile torture chamber for the village psycho. Or both. And that's a tradition we're proud to maintain.”

The Bravado Youga Classic is a vehicle featured in Grand Theft Auto Online as part of the Bikers update, released on November 22nd, 2016, during the Youga Classic Week event.

The Youga Classic is depicted as a full-size van prominently based on the 2nd Gen Ford Econoline cargo van, seen in the overall design and front end detailings, particularly the lower vents below the main grille. The sides with no windows are also prominent characteristics of the Ford Econoline.

The Youga Classic, as the name suggests, is the classic version of the Youga, which has a more traditional styling, but keeping the overall shape and layout. The lower area of the front features a small chrome bumper with a license plate on the driver side and numerous horizontal vents above, while the upper area is predominated by a chrome panel housing the rectangular grille and the four circular headlamps. The hood is relatively small and is aligned with the slanted windshield.

The sides of the van are defined by the slight flares on the wheel arches and features a set of functional sliding doors for rear access, together with horizontal chrome handles. The front doors feature cursive "Youga Classic" badges and rectangular rear-view mirrors finished in chrome. A set of sunshades/wind deflectors can be seen above the door windows.

The rear end is mostly occupied by a single compartment door, which has a single chrome handle on the center and the license plate on the lower right corner, along with a cursive "Youga Classic" badge on the lower left corner. The outer sides have rectangular tail lights, each one consisting of dual red lights and a single reverse light in between. The lower area features a chrome bumper, as well as the single exhaust pipe below, on the driver side.

The primary color of the van is applied around the body and the secondary one on the roof and the lower portions. A tertiary color is also available, which is only applied onto the "Sunshade" and the "Arch Extensions" (if these modifications are present). It uses a set of wheels similar to the ones from the Police Transporter, but the portion around the center is plain and are fitted with whitewall tires.

Overall, the Youga Classic has similar performance to its modern counterpart. It has a low revving diesel engine and sluggish speed and acceleration. Unlike the Youga, however, the vehicle has slightly higher suspension and is thus more susceptible to rough terrain, but the lack of power means it lacks the potential for offroading, even with upgrades. Also, it has a decent amount of durability, being able to withstand collisions and gunfire. All in all, the Youga Classic is more favored for visual looks over performance benefits. Unlike the original Youga, which only seats the driver and one passenger, the Classic version seats three passengers in addition to the driver.

The vehicle is powered by a single-cam Inline-4 engine, with the model being reused from the Burrito. It is coupled to a 5-speed gearbox in a front engine, rear wheel drive layout. Its engine sound appears to be an edited variation of the one used in the Youga, the Burrito and the Pony, with a higher-revving tone similar to vehicles like the Surfer, the Injection and the Dune Buggy (with the van engine sound barely heard on higher engine revolutions).

Installing the "Spare Wheel" modification will increase its traction slightly, in the same way as a spoiler. 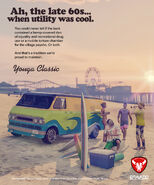 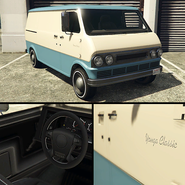 The Youga Classic on the updated Rockstar Games Social Club.

The Youga Classic in the cinematic preview on Rockstar Games Social Club.

Inside the rear of the Youga Classic. 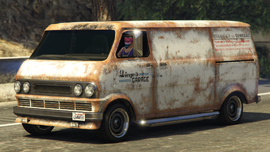 The Youga Classic as seen in a Steal Supplies mission, with a Rusty Shop Van livery. (Rear quarter view) 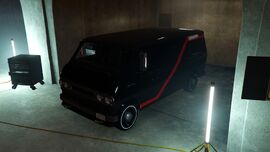 The Youga Classic provided as a departure vehicle by Zach Nelson for The Diamond Casino Heist. 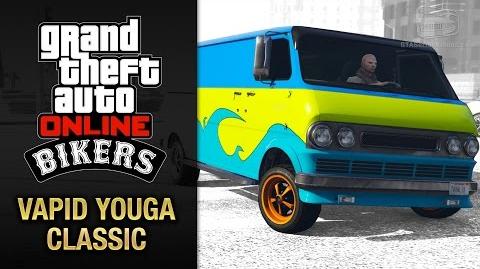