Not to be confused with Yoga.
“No-nonsense, all style. The man's/woman's van for all occasions. As long as those occasions are commercial trade, hauling all your over-sized family around, or bussing in the wrecking crew.”

The Youga is based on a 1994-2003 Dodge Ram Van, although the stacked headlights and front grille appear to be inspired by those on the 1979-1985 Ram Van. Unlike the real life inspiration, the van has two sliding doors instead of one.

The design of the van is rather simple, featuring a large body and a relatively ample cabin. The front end of the van has a bulky chrome bumper with a small intake on the center and a plate holder on the driver side. The middle area is predominated by the small dual intakes and the dual grille with black surroundings and a colored horizontal separation on the middle, with the lower one bearing the silver lettering on the left displaying the manufacturer name, and the upper one the manufacturer emblem on the center. The outer edges of the car have dual sets of rectangular headlights with a blacked-out appearance and small turn signals. It also has a small sloped hood.

The sides of the van are very traditional, featuring protruding arches and mudguard extensions on the rear. Single body lines can be seen running through the sides, which are at the same height as the upper headlights, together with black door handles and rectangular mirrors. The cabin area uses small sunshades/deflectors on the door windows, as well as dual windows on the rear section. Despite the apparent use of sliding doors (evident by the location of the handles), these cannot be opened at all, as they are within the model.

The rear end of the car follows a similar pattern to most vans, with large compartment doors, blach handles and a body line connected to the ones on the sides. The rear left door bears the silver lettering displaying the manufacturer name on the lower left corner, while the rear right one bears the name and "5.0 Turbo-D" badges on the lower right corner. The car also features a bulky chrome bumper with the license plate on the center, as well as the single exhaust pipe on the right, just below the bumper.

The interior of the van is shared with vehicles like the first generation Burrito and the Pony, using the same dashboard model and analog dials. Even though it has an ample room, the Youga is only capable of carrying the driver and a passenger, since the rear compartment lacks rear seats and is mostly intended for accomodation of a roll cage.

The primary color of the vehicle is applied on the bodywork, while the secondary one is applied on the lower sections and the arches. The stock wheels appear to be a variation of the "Fujiwara" tuner rims available in Los Santos Customs, wrapped in medium-profile tires.

Even with added performance parts, the van remains reluctant when accelerating. Top speed is rather low (in comparison to vehicles like the Duneloader, which can reach higher speeds). One feature of this car is its weight and durability. Both are very high, giving it the ability to ram vehicles without slowing down much or taking damage. Despite its bulky weight, it has reasonable handling at medium speeds, although it can face difficulties at higher speeds, especially due to its poor braking distance.

The vehicle is powered by a high-performance, transversely-laid single-cam Inline-4, coupled to a 5-speed gearbox in a front engine, rear wheel drive configuration. The vehicle has two badges: one stating to have a 5.0 (5.0L) Turbo-D (Turbo Diesel) engine and other stating to have a 5000 TTD Turbocharged engine (resulting in a 5.0L Twin Turbocharged Diesel engine). It uses a low-revving and smooth engine sound shared with vans such as the Burrito, the Rumpo and the Pony. In the enhanced version, the vehicle assumes a smoother tone, as with the Burrito, the Speedo and the Pony. 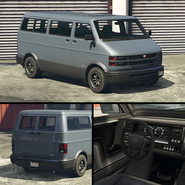 The Youga on the updated Rockstar Games Social Club.