You Tool is a retail, home improvement and hardware company featured in Grand Theft Auto V.

A You Tool store can be found on Senora Freeway in the Grand Senora Desert, Blaine County, though it is inaccessible. It includes a large parking lot, a Discount Jewels shop and a self-storage service named Carson. A Sprunk vending machine can be found directly outside the entrance.

Flags atop the building depict the national flag of the United States and the San Andreas state flag. The business is advertised on the radio and by Imran Shinowa during the reality show "Fame or Shame".

The company is a parody of The Home Depot and Lowe's, two competing big-box hardware stores in North America. The orange signage and shopping carts near its entrance are likely references to The Home Depot, while the dark blue building and the arched shape of the store front is likely a reference to Lowe's.

Imaging Voice: "Sure, you work in an office. Sure, you do pilates. Yes, your wife earns more money than you do. But don't let anyone tell you you're not a man. Let them know - you're a tool! You Tool! The do-it-yourself mega hardware store for guys just like you - real tools. Guys that don't need to hire a plumber or electrician, guys who do it themselves - tools! Blue-collar guys aren't geniuses, and neither are you. Demonstrate this to your wife once and for all at You Tool. Buy a circular saw - any guy can use one of them; gardening is for ninnies. Wire like the pros and make your house the safe place you can be proud of. Show that wife who's boss - the guy with the belt full of gear and a house under control. Show your wife who the family tool is - You Tool, the mega hardware superstore." 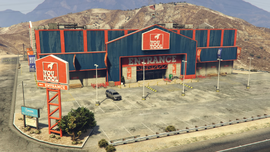 You Tool store on Senora Freeway.
Add a photo to this gallery

Retrieved from "https://gta.fandom.com/wiki/You_Tool?oldid=1193113"
Community content is available under CC-BY-SA unless otherwise noted.