You've Had Your Chips

• ­Head towards the factory unit on the outskirts of town. You're going to disturb their operation.

• ­Those mobsters have some guards watching the main goods entrance. Try and get into the factory unnoticed.

• ­They're expecting visitors now! Get into the factory quickly!

• ­Destroy every one of those injection molding machines now!

• ­Great work, the job's done! Get back to Woozie's casino in one piece!

"It's obvious where these fake chips are coming from. The Sindacco Family owns a plastics factory across town. I'm gonna blow it to shit!"
— Wu Zi Mu

You've Had Your Chips is a mission in Grand Theft Auto: San Andreas given to protagonist Carl Johnson by San Fierro Triads leader Wu Zi Mu from his office in The Four Dragons Casino, located along The Strip in Las Venturas, San Andreas.

Woozie and Carl are inside Woozie's office playing blackjack when Guppy comes in the office, presenting two casino chips to Woozie. Woozie realizes that one of the chips are fake, and apparently, the Sindacco Family is to blame. Infuriated, Woozie wants to blow up a plastics factory where the chips were made. Carl tells Woozie to chill, and decides that he goes himself.

Carl makes his way to the factory in Whitewood Estates. Once there, he realizes that the front entrance is guarded, so he makes his way to the other entrance. Carl can choose to sneak behind some shipping containers to approach the factory, or rush in head-on, being spotted by some Mafia members in an Admiral. Once inside, the boss of the factory tells the thugs to shoot Carl and protect the chip-making machines. However, Carl kills the thugs, and destroys the machines. He then makes his way back to the casino. Guppy asks him how did it go, and Carl says the counterfeit chips have all been taken care of.

The rewards for this mission are $10,000 and an increase in respect. The mission Don Peyote is unlocked. The Desert Eagle and the Combat Shotgun become available at Ammu-Nation. 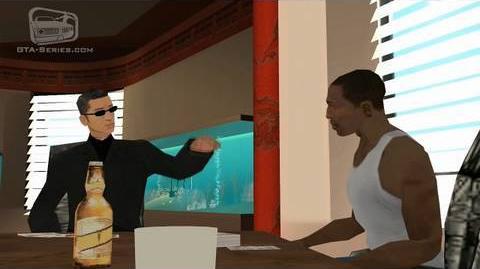 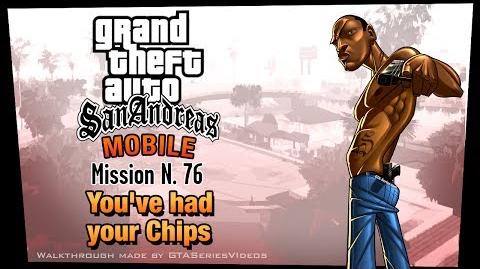 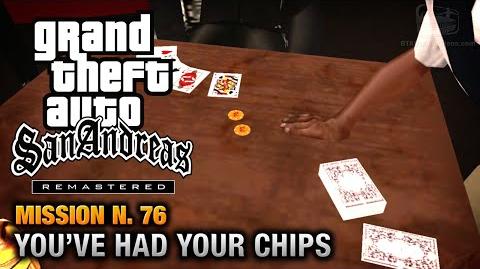 Retrieved from "https://gta.fandom.com/wiki/You%27ve_Had_Your_Chips?oldid=1241004"
Community content is available under CC-BY-SA unless otherwise noted.