Standard White - 100%
“With a vehicle as seminal as the Yosemite, it's hard to know where to start. You could talk about the drop-center ladder frame and the low slung cabin. You could talk about the independent front suspension. Or you could talk about how this thing has been slammed so hard you'll have to be careful driving over fallen leaves. But at the end of the day, you won't be talking at all, because you'll be too busy grinning like an idiot whenever you're behind the wheel.”
— Southern San Andreas Super Autos description.

The Yosemite is a full-size pickup truck featured in Grand Theft Auto: San Andreas and a mid-sized truck Grand Theft Auto Online as part of the The Doomsday Heist update. It is manufactured by Declasse in the HD Universe.

The Yosemite is evidently a full-size pickup truck larger in size than Bobcat, resembling a heavy-duty version of a 1988-1999 GMC Sierra full size pickup (but missing a pair of headlights). Its two-tone color schemes seem inspired by most early 1980s pickups, consisting of wide side stripes in a primary color and the lower and upper sides in secondary. The vehicle is only capable of seating two.

The PS2 and the mobile versions of the Yosemite have a twin-rear axle tire configuration, while the PC version does not. The Yosemite cannot be modified.

“Only in America we have the rights to put a huge Displacement V8 Engine inside a vehicle made to carry pigs and hay bales. We also love driving around in oval-shaped tracks for 500 times in said vehicles. In America, we like big cars made of cheap plastic that might look new from the outside but share 90% of the components with shit we made 20 years ago. Meet the Declasse Yosemite, a uniquely American creation that says, 'Fuck you, to your MPG-conscious hybrids from Japan'. What’s the problem if it only gets 6 MPGs? Our gas is less than half the price of most other countries, but we still like to complain about how expensive it is. This truck is not only good at hauling and racing though, it’s also great at being lowered to the ground by Mirror Park hipsters that were just waiting for you to make fun of them. Declasse Yosemite, 3 Imperial tons of American culture.”
— Blonded Los Santos 97.8 FM commercial.

The Yosemite is now depicted as a medium-sized pickup truck seemingly based on the 1967-1972 second generation C10.

The truck takes on a simplistic design, featuring chrome bumpers, rear-view mirrors, and trims found on the sides and around the windows, as well as a windshield banner. Its front end is quite similar to that of the Towtruck, but featuring turning signals. The rear end has rectangle tail lights and a tailgate with "DECLASSE" embossed in chrome, surrounded by a rectangle. The truck bed has black panels. The truck only seats two, as did the previous version of the Yosemite. Due to its stanced nature, the Yosemite is treated like a muscle car, likely because of the modifications it can have, similar to vehicles like the Rat-Truck and the Slamvan Custom (along with its original variant).

In-game, the car has a suspension that resembles air-ride suspension. When at a standstill, the truck automatically lowers to the preferred suspension added in the Mod Garages. When in motion, the suspension lifts up to provide a smooth ride without having to worry about being too low to the ground.

The Yosemite is painted in a primary color for most of its bodywork, the lower side is painted in a secondary color, and its interior is also paintable. It shares the same wheel design as the armored vehicles (Schafter V12 (Armored), Baller LE (Armored), etc.), being similar to the "Drag SPL" muscle rims available in Los Santos Customs, albeit fitted with custom tires.

The Yosemite is powered by a longitudinally-mounted V6 engine with a 2-barrel carburetor.

Based on the vehicle's internal statistics, the Yosemite possess superior qualities over most other pickup trucks, (second only to the Picador in terms of performance) with good speed, acceleration, and handling; these attributes were also tested by Rockstar to ascertain the vehicle's performance.

In practice, however, the Yosemite is revealed to be one of the heaviest pickup trucks in the game, resulting in severe understeer, less responsive brakes and sluggish acceleration, but still manages to achieve above average top speeds at straightaways. The truck may be useful for off-roading due to its high ground clearance, but its stiff suspension may also prove to be a problem when traversing rough terrain. Even worse is the RWD configuration which is rubbish when in sand terrain.

The Yosemite is essentially a sleeper, in that it has unexpectedly good performance under an otherwise utilitarian shell. The Yosemite features an excellent acceleration compared to other vehicles in the Muscle class, in part due to its high traction off-the-line while also boosted by its high engine power. This makes the Yosemite a viable option in Muscle car races due to its comparatively high traction-to-speed ratio compared to the Pißwasser Dominator and Sabre Turbo Custom. However, due to its slammed suspension, curbs and other obstacles should be avoided, especially due to the air-ride suspension that can beach the Yosemite on even small objects. This mechanic was changed in the Arena War update, as the truck raises with the handbrake button held.

The Yosemite is powered by a single-cam V8 engine with carburetors, powering the rear wheels through a 5-speed gearbox. The Yosemite seems to belch out more exhaust fumes while idling than most cars.

Its traction can be slightly increased with any "Spoiler" modification. This also applies to the bedcaps, despite not being technically spoilers.

The Yosemite on the original PlayStation 2 and mobile version of Grand Theft Auto: San Andreas. Note the double rear wheels. 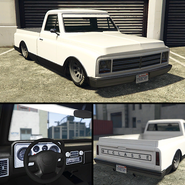 The Yosemite on the updated Rockstar Games Social Club.

The Yosemite in the cinematic preview on Rockstar Games Social Club. 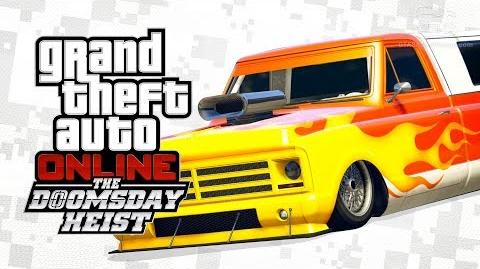