Wasted
Busted
Tampa destroyed before parking at the destination

Monster
Zeroing In (if Wang Cars has been bought first)
Freight Train Challenge
What happens in Las Venturas... achievement

Wu Zi Mu: "This isn't over yet."
CJ: "What'choo mean?"
Wu Zi Mu: "Well. Your former friends have a factory. And the way I see it, if you take that out, you will have put them out of business for good."
— Wu Zi Mu tells Carl Johnson about the Loco Syndicate's drug factory

Cesar arrives at the garage and congratulates Carl for taking down the Loco Syndicate, but Carl is upset about the fact that he had to kill his childhood friend, Ryder. Cesar, however, reveals that Ryder previously attempted to have sex with Kendl. Woozie arrives and explains that the Loco Syndicate is now finished and the only thing left to do is to destroy the crack factory in Doherty. One of Woozie's guys has set a wired car for the job. Carl then goes to the garage in Downtown and picks up the wired Tampa, which he drives to the factory. The gate is closed and there are two guards that are killed by Carl, which prompts the alarm to go off and the gate to open, while more henchmen surround the factory in order to stop him. Carl gets inside the factory and parks near the chemical containers. He activates the bomb and escapes in time, the resulting blast destroying the factory and leaving a pile of rubble instead. The gate being closed, Carl manages to take a Voodoo and perform a stunt jump over some containers, which takes him outside the factory. Carl safely gets back to his garage, ending the Syndicate's operations in San Fierro.

The rewards for this mission are $25,000 and increased respect. The mission Monster is unlocked. Also, the player can now buy the Wang Cars showroom (only if the Driving School has been completed first), which unlocks the Zeroing In mission. The player may also buy the M4 from Ammu-Nation from this mission onwards. The player may also now traverse Tierra Robada, Bone County and Las Venturas without getting any police attention, thus opening the entire map to the player, although Carl cannot yet buy safehouses in Las Venturas. Despite the new areas opening up, several more San Fierro-based missions remain before the region is complete.

Cesar will stop phoning the player about the Big Smoke's Cash and Loco Syndicate Drug Courier side missions after this mission, as the location to which the 'yay' comes from, has been destroyed. Furthermore, the player can now attain a six-star wanted level (on iPad version it could be attained in the beginning of game).

Carl Johnson: Speak on it.

Unknown Caller: This is a friend of yours. I've got some information relating to your brother. Come to my ranch and I'll explain. It's in Tierra Robada, cross the Garver Bridge, head south.

Unknown Caller: I can't talk right now. Get your ass over here.

Carl Johnson: Moms always told me not to talk to strangers.

Unknown Caller: And look what happened to the bitch! Now if you want your brother to go to sleep tonight with his tongue intact, get your ass over here! Goodbye.

Carl Johnson about to activate the time bomb in the vehicle.

Carl Johnson about to drive the Tampa into the crack lab. 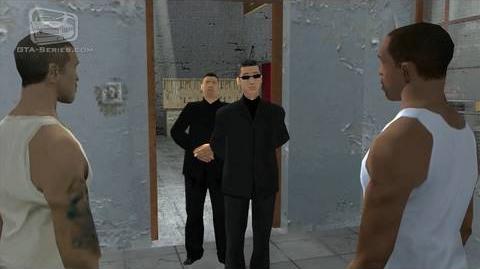 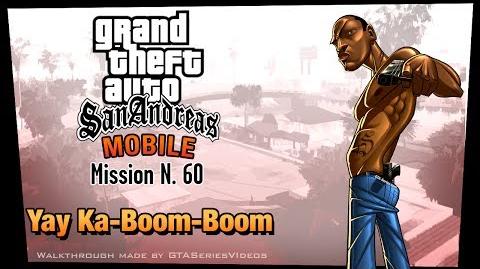 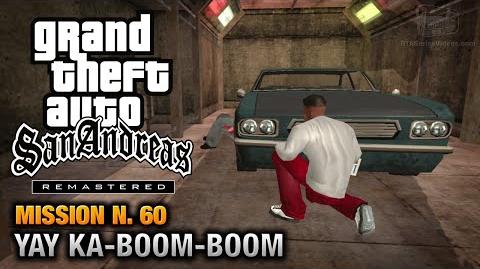