GTA Wiki
Register
Don't have an account?
Sign In
Advertisement
in: Gangs, Gangs in GTA IV, Gangs in The Lost and Damned,
and 3 more
English

Members of the Yardies.

Yardies, also known as Jamaicans are the loose coalition of the Jamaican posses that operate out of the Beechwood City/Schottler area of Broker and the Willis area of Dukes, Liberty City. They play minor role in Grand Theft Auto IV, and are featured in The Lost and Damned, The Ballad of Gay Tony and Grand Theft Auto: Chinatown Wars.

The gang is led by Real Badman and his underboss and best friend, Little Jacob. They are one of the major ally groups in GTA IV, as Jacob is a close friend to the game's protagonist Niko Bellic.

The specific year of the gang's foundation is unknown, but their earliest presence dated by 2001, when Real Badman and Little Jacob, both known members of the Yardies, were convicted for armed robbery aged 21 and 20 respectively. In 2002 Real Badman was arrested for selling cocaine, hinting his future career as a drug dealer, and Little Jacob was arrested for burglary. LCPD suspects them in several high profile armed robberies and hijackings, implying their methods were usually ruthless and not business-oriented.

By 2008 Real Badman became the head of marijuana and cocaine distribution network based in East Liberty City, when Little Jacob appears to be his right-hand man. According to the events of GTA IV, Badman and Jacob still had enemies and competitors among the other Jamaican posses, despite their strong positions as major drug dealers. Little Jacob sees cocaine trade as the main reasons of fights within the gang, since this business is too ruthless and bloody for Rasta culture, which point is chilling and smoking herb together. Frequent conflicts, as well as constant drug use, led Badman to growing paranoia. His methods of doing business became more bloody and radical and he rarely left his home without being heavily armed.

By 2008 conflict of interests with other Jamaican drug dealing crews grows, which made Badman and Jacob decide to make a truce with them. They set up a meeting between Jacob and their representative at Dillion Street in Schottler. Jacob goes to the deal, finding out it is a trap to "teach Badman a lesson". Jacob is saved thanks to Niko Bellic, the man who took Jacob to the meeting (and the cousin of Jacob's friend Roman).

Badman's expansion on new territories put him in need for a new supplier of merchandise. He sends Jacob to a drug deal with the new suppliers, which Jacob doesn't trust and describes as "harbor sharks". Jacob once again is supported by Niko, and the two arrive to the dealers' apartment. The dealers attempt to escape, but are killed by Niko. Badman, who was informed about betrayal by Jacob, orders him to take down the rest of the dealers. Jacob and Niko drive to the dealers' second apartment, ending the small faction.

When competition among other Jamaican posses is dealt with, Badman and Jacob finally invites Niko inside their apartment in Schottler. Badman tells Niko, that one of the new drug dealers in South Bohan sells the drugs on the corner, which Badman claims to be part of his own territory. The Hustler refuses to share his income with Badman. Despite Yardies are not presented in Bohan, Real Badman decides to deal with the disrespect in his usual ruthless way, ordering Niko to track down dealer to his suppliers and then eliminate them.

Niko successfully completes the task and earns trust of Badman, whos paranoia continues to grow. Little Jacob becomes a close friend of Niko and offers him a job of drug courier for the gang. He leaves drug packages for Niko in old beaten cars near Homebrew Cafe. Deliveries usually end with ambush by Triads, Albanian mobsters or police. Deliveries only go smooth when they are set up with paranoid dealers, who will wait for the package only for limited time. Deals, that are ambushed by the police, are usually set with Irish-American Killers, which makes them partners of the Yardies.

After nine successful deliveries, Real Badman and Little Jacob will hide the package inside a Jamaican colored Huntley Sport instead of a beater. When Niko makes the tenth delivery, Jacob will text him, telling him that he can keep the car as a present. He also reveals, that there will be no more drug deliveries for him, since the police is investigating their activity closely.

After Dimitri Rascalov took over Russian Organized Crime in Hove Beach, Badman got another conflict of territories, this time with Russian gang members. Considering Badman's operation as obviously smaller and weaker than theirs, Russians started to "test" him, telling him what to do and making him pay the debts, which Badman sees as acts of disrespect. He once again unites forces with Niko Bellic during a random encounter, and eliminates the rival Russian gang members, who hang out in an alley in Carrollton Street. In oppose to his previous bloodthirsty decisions, this one was suggested by Niko.

Events of Episodes from Liberty City

Sometimes during the gang wars The Lost MC attacks Jamaican gangsters in order to kill them or steal their goods. Armando Torres and Henrique Bardas also see Yardies as their possible victims and assault them during drug wars.

In Grand Theft Auto: Chinatown Wars, they appear in Driven to Destruction, and some cars which are almost blown up in Bomb Disposal were most likely theirs. In PSP version of the game they also appear in the missions from Melanie Mallard. They are called "Yardies" most of the time in the game. There are also three Jamaican drug dealers available for Huang Lee: Winston, Bone and Jamal.

Yardies don't appear in Grand Theft Auto V, but Tavell Clinton on his Lifeinvader page, reveals that he lives in an apartment in Schottler with two Jamaicans and a Senegalese student and that they cannot understand one another.

Yardies seem to be Rastafarians, despite the strong denial of violence and heavy drugs within religion. Little Jacob mentions this differences, judging cocaine trade inside the gang and blaming it for fights between Rastas and changes in Badman's character. Yardies speak iyaric as well as patois, frequently smoke marijuana, and wear their hair in dreadlocks. They can be seen wearing brightly colored suits or army fatigues, and some wear Rasta tams, which is a sign of rudeboys style. Some can even be seen wearing gold African continent pendants. They are well-armed, most members carrying pistols, or occasionally a knife or baseball bat. They drive Voodoos and Huntleys painted in the colors of the Jamaican flag: green, black, and gold. They can mainly be found in the Beechwood City region, particularly the Homebrew Café, and have a smaller presence in neighboring Schottler and Willis as well.

Due to Niko being close friends with Little Jacob, the Yardies welcome him to their turf. If Niko is engaged in a fight, or is attacked by a pedestrian, the Yardies will defend him by all means. This will only happen after Shadow, before that mission, Jamaicans will be hostile if you attack them. They may use knives, pistols, pump shotguns or Micro Uzi's to attack the player.

Montage of Yardies, their clothes, the cars they drive. 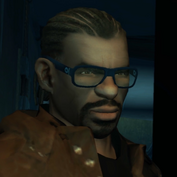