TLAD
The Yankee is a large commercial truck featured in both 3D Universe and HD Universe. It is manufactured by Vapid in the HD Universe.

In all of its appearances, the Yankee is depicted as a box truck with a long wheelbase and a large cab with room for two occupants, including the driver. Like many industrial vehicles, the Yankee has a changing "skin", along with a random paint job. This means that the Yankee will have a random company logo printed on the side of the truck.

First introduced in Grand Theft Auto III, the Yankee is loosely based on the Ford F700 and is predominantly designed to be one of the largest straight-trucks available in the games, having a tall nose, a large grille in the center, and square-shaped headlights, as well as a boxed cargo compartment (which, by Grand Theft Auto: Vice City, would contain actual cargo).

The Grand Theft Auto IV rendition assumes the design of an 1980s International Harvester S-Series/1980s GMC Topkick, and appears to retain the characteristics from the 3D Universe iterations, but is noticeably taller and bigger.

The front of the truck has a large metal bumper with riveted details, sporting a small license plate in the center and small vents beside it. The upper area of the cowl (hood) sports a large frontal grille with two vertical separations and seven horizontal separations, with the former being wider than the latter, while a small plate with the Vapid logo is seen in the center. The fenders have a set of circular headlights on the frontal section and square turn signals mounted above, while the nose has a small upper intake near the windshield and gray "YANKEE" lettering on the sides. The cabin sports large side steps and handles for access, as well as large rear-view mirrors.

The rear section mainly consists of the cargo box, which features various marker lights and black protruding strips along the sides, as well as mudguards for the rear wheels. The rear end has two large cargo doors and an extended section with another protruding strip. The tail lights are mounted on a rear guard seen below the truck, while the license plate is mounted below the rear-left corner of the box and has a red marker light above. The chassis has two large side-mounted fuel tanks and a single exhaust pipe below, which ends slightly ahead of the left fuel tank. Depending of the livery, a cooling apparatus can be seen above the cab.

The Yankee is seen in two possible color combinations, consisting of a primary one for most of the cabin and a secondary one for the frontal area and in the form of a wide stripe passing around the cab; the first one is a light gray primary with a white secondary, while the second one is a darker variation with a blue secondary. The Yankee is available either in blank or in one of six liveries: Sprunk, Liberty State Delivery, Redwood Cigarettes, eCola, Pisswasser, or Binco. The eCola, Pisswasser, and Binco variants all have a cooling apparatus above the cab, while the Sprunk variant does not. The Sprunk variant also appears to be heavily worn down compared to the others, while the Liberty State Delivery variant is seemingly clean. Optionally, graffiti marks can be seen on any of these versions. It uses large industrial wheels with a similar design to the ones seen on vehicles such as the Benson, the Mule and the Phantom.

For Grand Theft Auto: Chinatown Wars, the truck seems to be a combination between the 3D Universe model and the GTA IV model (judging by the lack of an air conditioning unit and a stripe on the cab), which will appear with almost the same liveries as in GTA IV. 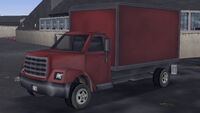 The Yankee's size and weight often contributes to its poor cornering, poor acceleration and poor hill-climbing abilities, but may achieve decent speed on a straightaway. The performance and appearances of the Yankee are also slightly different between renditions in Grand Theft Auto III and Grand Theft Auto: Liberty City Stories.

The Yankee is generally useless due to its performance and susceptibility to rollovers on rough terrain and it has no special features, except that it may be used as a moving "staircase". The player can jump on the hood, and then to the roof, and then to the container. This can be very useful to reach high places, like hidden packages and weapons, even Easter eggs.

The truck uses a diesel engine with a 5-speed gearbox and a rear-wheel-drive layout, and uses a rather smooth sound similar to the Benson and the Mule.

While the vehicle retains most of the properties from the 3D Universe renditions, the Yankee is powerful to ram small vehicles thanks to its mass, as well as slightly better, more responsive steering due to the short wheelbase, but is still a difficult vehicle to drive. Its suspension is acceptable to sort uneven terrains, but its heavy weight makes it a poor choice off-road, as the wheels will lose traction easily. Its suspension and large size makes it prone to rollover when an obstacle is present, especially on slopes. Its braking appears to be acceptable for a truck of this size.

The open bed variant of the Yankee featured in The Lost and Damned is drastically different over its box truck counterpart. Because of its decreased weight, the engine output is much higher, giving it better acceleration and top speed. Its handling becomes nimble and responsive, while retaining its capacity to ram small vehicles and sorting out uneven terrains. While it is still a bad choice for off-roading, traction loss is less noticeable, given its lighter build and the rather unusual AWD layout. All these improvements makes the Yankee one of the fastest industrial trucks in the game, and can be used to perform burnouts and "donuts". Despite this, the open bed Yankee suffers from an only disadvantage: this vehicle cannot steer under braking pressure, evidenced by the wheel locking during the braking sequence. The bed of the truck can be used to carry a small vehicle such as a Rhapsody, but the limitations regarding vehicle transportation mean that the truck would become extremely slower and unstable with the vehicle constantly pushing around, damaging the bed walls most of the time.

The Yankee appears to combine its performance of the 3D Universe version and the GTA IV box truck model. The truck is able to reach moderate speeds, but has low acceleration and a rigid handling. The truck is, however, resistant to collisions and can sustain a good amount of gunfire. 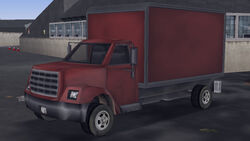 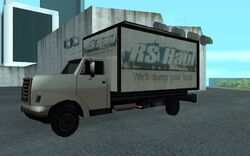 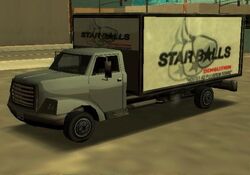 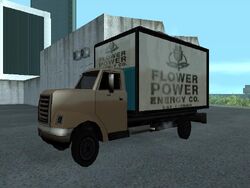 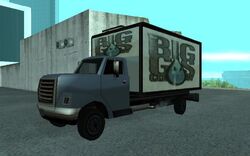 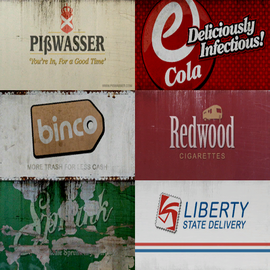 Liveries that can appear on the Yankee in GTA IV. 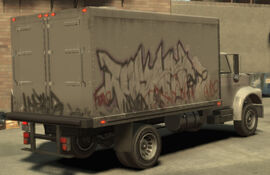 Graffiti on a Yankee. This livery may appear combined with any of the company liveries.

An open bed Yankee in The Lost and Damned. (Rear quarter view)