Bartender at the Galaxy Super Yacht

The bartender is a young blonde woman who is in charge of the bar in the Galaxy Super Yacht. She speaks with a moderate French accent, suggesting she hails from a Francophone country.

During A Superyacht Life - Salvage, the yacht is invaded by the Kkangpae who kidnap the captain, Brendan Darcy, and herself in the process. Subsequently, they are held as hostages as revenge for having their yachts destroyed. The Kkangpae take the bartender and Darcy to a peninsula near Cape Catfish, after which the player has to rescue them and return them to the yacht. 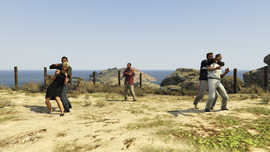 The bartender and Darcy being held hostage during Salvage.