Unlike its competitors, such as RON, Globe Oil, and Terroil, Xero does not appear to have set up any gas stations in Liberty City, although it does operate a refinery at the southwestern corner of the Acter Industrial Park in Alderney. The warehouse in Industrial has the Xero logo painted on storage tanks and on parts of the building, indicating that it was their former refinery before abandoning it and moving to Alderney. Xero storage tanks and faded advertising of the brand can also be found in selected parts of Liberty City, and Xero sponsorship vinyls are visible on certain Bati Customs designs.

The company owns several inaccessible filling stations across San Andreas. ATM's and Jerry Cans are usually found at these gas stations. There is also an industrial building on Greenwich Parkway in the Los Santos International Airport, as well as a refinery in Blaine County.

Xero Gas appears to be a primary vehicle racing sponsor, in a similar manner to other companies such as RON and LTD. In the enhanced version of the game, they appear as a primary sponsor on the Rapid GT Classic, Sentinel Classic, Jester Classic, Comet Retro Custom and Lynx. They also have their logo sponsored on the Xero Blimp. While not major sponsors on the livery, they also appear on various other liveries, including the Jester (Racecar) and Massacro (Racecar).

It could be based on Exxon, as both have an "x" in their names and share the same colors in their logos. Its name and logo design also appear to be similar to that of Xoomer in Grand Theft Auto: San Andreas. It might also be based on Chevron, given the fact that much like Chevron, it has refineries on the East Coast, yet no presence in gas retailing there. Xero's logo also features "Chevron arrow" shapes in the 'X' letter on their logo in red and blue much like the Chevron logo.

Xero's vintage logo is very likely based on the logo for Esso due to the oval shape with the blue and white colours with red text in the middle. This is very likely a reference to Exxon buying Humble Oil and subsequently the Esso brand in 1972, after which most Esso stations in the U.S. were replaced by Exxon ones.

The Xero to Hero livery for the Sentinel Classic is based on the Mobil 1 BMW M3 and the Xero livery for the Comet Retro Custom is loosely based on a Mobil 1 1989 Porsche 944, meaning Xero covers the Mobil brand in the HD Universe, which is likely a reference to Mobil being merged with Exxon forming ExxonMobil in 1999 which currently owns the Mobil and Exxon brands.

Xero Gas do not have any filling stations in GTA IV, however there is a Xero Gas refinery within the Acter Industrial Park in Alderney

The Xero Gas Acter Industrial Park refinery in Alderney.
Add a photo to this gallery

Route 68, Harmony.
Add a photo to this gallery

Xero Gas also have a warehouse within the Los Santos International Airport grounds. 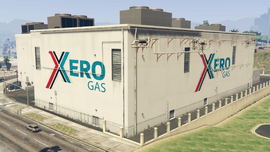 Industrial building in the LSIA district, Los Santos (GTA V).
Add a photo to this gallery

A Xero gas canister found in the protagonists garage. 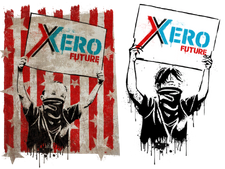 Graffiti of some kids holding a sign saying "Xero Future" in the style of the Xero logo meant to protest the company and perhaps their impact on the environment. 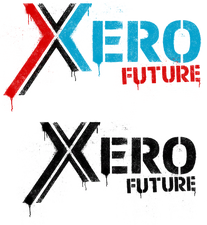 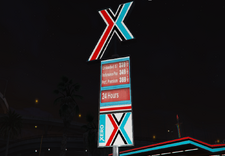 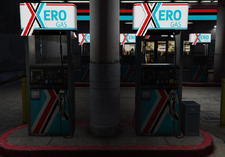 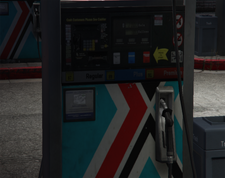 "Give your car a boost" Xero advert in Grand Theft Auto Online. 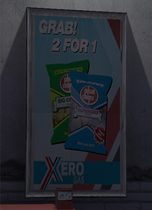 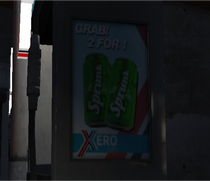 A Sprunk advertisement at a Xero gas station.
Add a photo to this gallery
Vehicle sponsoring

A Lynx with a Xero Gas livery. (Rear quarter view)

Team Xero livery for the Retinue.

A Sentinel Classic with a Xero to Hero livery.

A Jester Classic with a Xero Racing livery.

A Zorrusso with a Xero Gas livery.

A Novak with a Xero Gas livery.
Add a photo to this gallery

Retrieved from "https://gta.fandom.com/wiki/Xero?oldid=1206493"
Community content is available under CC-BY-SA unless otherwise noted.