Standard White - 100%
“Poised delicately between BAWSAQ chic and bone-crunching utility, the Benefactor XLS is every car to everyone. Whether you're attending a board meeting halfway up a rugged cliff face or ferrying humane remains out of your place of work, it's reassuring to know the Germans have got your back. Armored version available, obviously.”
— Legendary Motorsport description.

The Benefactor XLS (Armored) is an armoured SUV featured in Grand Theft Auto Online as part of the Further Adventures in Finance and Felony update.

The vehicle is essentially the armoured variant of the XLS, which features armour padding on the sides and window armouring on the pillars, in a similar manner to the armoured vehicles featured in the Executives and Other Criminals update. Notable changes over the regular XLS is the replacement of the chrome trims around the vehicle with blacked-out ones, the front bumper guard being finished in carbon-fibre, bolted-on panels over the fender flares, vented skirts at the bottom and the removal of the "XLS" badge on the rear compartment door. The armour paddings seem to be smaller and numerous than the other armoured vehicles. The vehicle also has Limo window tint by default, which cannot be modified.

Colour distribution is similar to the regular XLS, where only the primary colour is applied to the body. Its wheels share the same rim design as the "Nevis" off-road rims available in Los Santos Customs, wrapped in high-profile tyres.

Performance-wise, the vehicle is identical to the standard model, sharing the good handling and stability over rough terrain. Despite its armour plating, it has slightly better speed and traction than its normal counterpart, and its weight was increased to endure punishment from both gunfire and collisions.

The XLS (Armored) can take the following:

It can be noted that the XLS (Armored) shares its armored capabilities with both armored Cognoscentis, Schafters and Baller LEs. 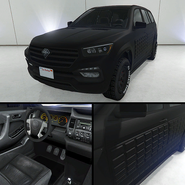 The XLS (Armored) as seen on Legendary Motorsport.

The XLS (Armored) on the updated Rockstar Games Social Club.

The XLS (Armored) in the cinematic preview on Rockstar Games Social Club.

The XLS (Armored) in the update trailer.