Standard White - 100%
“Poised delicately between BAWSAQ chic and bone-crunching utility, the Benefactor XLS is every car to everyone. Whether you're attending a board meeting halfway up a rugged cliff face or ferrying humane remains out of your place of work, it's reassuring to know the Germans have got your back. Armored version available, obviously.”

The Benefactor XLS is a luxury SUV featured in Grand Theft Auto Online as part of the Further Adventures in Finance and Felony update.

The XLS appears to take influence from the Mercedes-Benz GL-Class range, particularly the GLS63 AMG and GLC, where it takes the overall shape, beltline, hood styling, and loosely some of the frontal fascia features, such as the grille and headlights. The front fascia takes more influence from the third-generation Hyundai Santa Fe, sharing similar shaped headlights, grille alignment and additional lights. The rear tail lights are similar to a 2015-present BMW X1/2013-present BMW X5.

The vehicle shares a similar body to that of the Bravado Gresley, yet it sports luxury details around it. The central area of the front bumper features a lower guard with a small intake above it, while the outer edges have body-coloured sections with plastic lower edges. The middle area features a concave plastic section with C-shaped chrome detail on the edges, where a set of rectangle-shaped fog lamps and LED strips can be seen, as well as the license plate on the centre. The upper area is predominated by the chrome grille with a large Benefactor logo on the centre, while the outer sides feature a set of lamps with modern light strips, chrome housings and plastic trim around. The bonnet features two intakes near the windscreen.

The rear is mostly occupied by the rear compartment, featuring ovular rear lights which wrap around the rear quarter panel of the vehicle, as well as the license plate, the manufacturer emblem and a silver badge displaying the car's name. The section above the window features a small extension with a third brake light, connected to two plastic pieces beside the same window. The bumper area features a set of meshed intakes, with the outer ones having red light strips above. The bottom area makes use of a plastic guard with mouldings for the twin exhaust tubes. The vehicle uses "Cavalcade" textures and dials.

The primary colour of the car is applied on the bodywork, while the secondary one is applied on the central guard of the front bumper. The rims appear to be the same as the ones on the Huntley S, being a derivative of the "Split Ten" high-end rims available in Los Santos Customs. 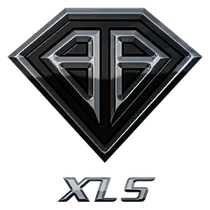 Being an all-wheel drive SUV, the car can perform decently off-road. Its all-wheel drive layout gives it the traction needed to traverse rough terrain, and gives it better traction on the road as well. The car has reasonable acceleration for an SUV, and has a better top speed than the typical SUV in the game. Overall, it is more comparable to the Gresley, albeit with a higher top speed. Its large weight and height often causes significant body roll when turning, but the vehicle's suspension handles most situations and prevents the vehicle from rolling over, although rollovers can be an issue when turning on rough terrain.

The engine cover appears to be a single-cam V8 engine, which is coupled to a 6-speed gearbox in a front engine, all wheel drive layout, with equal torque distribution. The engine sound is shared with the Stanier. 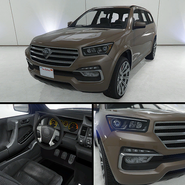 The XLS as seen on Legendary Motorsport.

The XLS on the updated Rockstar Games Social Club.

The XLS in the cinematic preview on Rockstar Games Social Club.

Taillight comparison between the XLS and the Gresley.