Standard White - 100%
“To those who argue that the supercar is dead and hybrid tech was only a fad, the XA-21 would like a word as soon as it's done banging your mom. And when you're done saying thank you, it'll show you the kind of annihilating performance that can only be achieved by locking a team of world-class engineers in a lab for six months and lacing their food with amphetamines. This is the cutting edge. And you're welcome.”
— Legendary Motorsport description.

The Ocelot XA-21 is a hypercar featured in Grand Theft Auto Online as part of the Gunrunning update, released on August 15th, 2017, during the XA-21 Week event.

“The XA-21 is the latest monstrous creation to escape Ocelot's experimental underground facility, leaving a trail of shell-shocked and visibly aroused onlookers in its wake. Packed with enough hybrid tech to make environmentalists salivate, the XA-21 is the epitome of cutting edge - now available exclusively at Legendary Motorsport.”
— Rockstar Newswire description.

The XA-21 is distinctively based on the Jaguar C-X75, seen in the body, silhouette, and rear wing. The front of the car seems to be heavily inspired by the 2017 Jaguar F-Type, particularly the bumper intakes and ovular grille, while the headlights appears to be heavily inspired by the Maserati GranTurismo. The rear of the car appears to take some influences from the McLaren P1, particularly its stock rear diffuser, rear window and stock exhaust, while the tail lights and rear curvature resemble the Aston Martin DBC Concept. Several elements of the car's design take influence from the Koenigsegg Regera, such as the side intakes and rear fascia influences. The interior of the car also appears to be influenced by the W Motors Lykan Hypersport.

The XA-21 is clearly distinguished by its rounded, aerodynamic profile, where the front is largely dominated by the oval grille on the centre, the dual intakes besides it and a smaller intake below. Black housings can be seen above the small intakes, featuring a set of circular lamps, vertical light strips and small turn signals on the inner sides. The bonnet area is relatively flat and curves down from the windscreen to between the light housings. Ocelot badges can be seen on the grille and the front portion.

The sides of the car are distinguished by the intakes on the rear section, a carbon-fibre detail below it, and the coloured rear-view mirror shells. The cabin area has an extended windscreen, carbon-fibre trim around the door windows and carbon-fibre rear-quarter panels. The XA-21 uses butterfly doors, folding out as they open, in a similar manner to the GP1 and Tyrus. The boot of the vehicle features a smooth, curved body with a glass window showcasing the engine, while the same badging detail is found within the carbon frame. The stock engine itself features a rather unique model, with various coolant hoses and carbon-fibre detail, as well as the Ocelot brand badge in the centre.

The rear of the car is mostly occupied by the vented area and the single exhaust tube, while the portion above is occupied by the central light strip and the two tail lamps on either side. A black rear housing the license plate and the two red strips can be seen below the vented area, while the bottom is occupied by a curved diffuser. The mechanical spoiler can be seen just above the rear lights, featuring the corresponding manufacturer badge. Its underside is mostly covered, with black bolted-on panels on the outer portions and a carbon-fibre plating on the centre, leaving the rear axle exposed.

The interior of the XA-21 is the same used on the Nero, with minor tweaks to fit the car’s design and manufacturer, such as the Ocelot emblem featured on the steering wheel, as well as the company name and XA-21 badge stitched into the seats of the car. Unlike the Nero, however, the XA-21 has an additional small, white neon trim located on the dials and AC.

The primary colour of the car is applied on the bodywork, the centre of the stock wheels and the paddle shifts, while the secondary colour is applied on the portions of the side intakes, the door handles and the details on the covering above the engine. A trim colour is also available for the dashboard, door panels, seats and stitching. It uses a set of paintable rims that alternates between linear spokes and arrow-shaped spokes, with the Ocelot logo in the centre of the wheel. However, only examples spawned in Content Creator or in the mission Repo - Do You Even Lift? may have coloured rims. 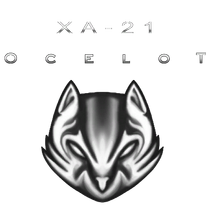 The XA-21 is unrivaled in terms of traction and cornering capability, beating all other supercars in the game. Its high grip translates well when going around multiple corners; however its weakness is its top speed, which is only average for the class (if acceleration has not been fully upgraded). The vehicle drives very similar to the Tempesta, as has excellent cornering and all wheel drive but an average top speed, though with the appropriate upgrades by increasing its acceleration, it can be a force to be reckoned with in races at the hands of a skilled driver.

The vehicle is powered by an engine that resembles that of the Jaguar C-X75 (apparently being powered by two diesel-fed micro gas turbines), which is stated to use hybrid tech. It can be replaced with either a race-tuned V8 engine or a custom V12 engine; these two only affect its traction, in the same way as spoilers. The car features a loud engine sound which produces a unique cracking sound when idling. The exhaust may also crackle after letting off the gas at high revs. 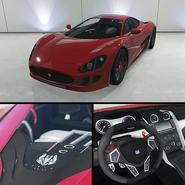 The XA-21 on Legendary Motorsport.

The XA-21 on the Rockstar Games Social Club.

The XA-21 on the updated Rockstar Games Social Club.

The XA-21 in a Cinematic preview on Rockstar Games Social Club. 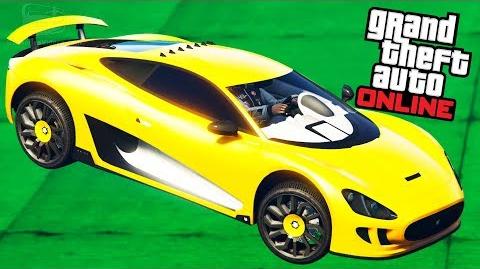