Standard White - 100%
“The cause of more UFO sightings across San Andreas than any other production vehicle of the decade, the Proto is the kind of concept car you get when your head of R&D is an 8 year old child with a stack of comics and a bowlful of MDMA. The future is here.”
— Legendary Motorsport description.

The Grotti X80 Proto is a prototype hypercar featured in Grand Theft Auto Online as part of the Further Adventures in Finance and Felony update, released on June 21st, 2016, during the Power Play Week event.

The X80 Proto is the first car in the series to be based on a concept hyper/racing car, namely the Ferrari F80 Concept, as seen in the frontal styling, especially in the grille area, side profiling and intakes. It also a bears strong resemblance to the Devel Sixteen. The mechanical spoiler seems to take its inspiration from the Ferrari FXX-K, as do the LED rear light units. The rear diffuser seems to be based on that of the GreenGT LeMans prototype car, which gives the X80 Proto a double diffuser array, not unlike those used in F1 from 2009 until they were banned in 2011.

On the front end, the car is clearly distinguished by its sharp end on the centre, followed by large frontal intakes on both sides, with carbon-fibre sections on the lower portions. The headlights are extremely sharply shaped and large, and progress from the interior of the upper frontal intakes to down the sides of the front fenders. The bonnet area features a triangular strip on the centre that is finished in carbon fibre, bearing the Grotti emblem on the front. Through the front windscreen, two adjustable shock absorbers and springs for the frontal suspension can be seen. The horizontal alignment of these suspension components implies the usage of a pushrod-actuated front suspension setup.

The side features a large number of progressive curves which originate from the front fenders and curve down to the bottom of the car, directly in front of the wheels. From there, two large intakes open on either side; one of which leads towards the engine bay for general cooling and ram-intake air, while the other flows into the rear wheel arches and provides cooling air for the rear brakes. The greenhouse/cockpit area features a long windscreen and black separations, followed by the gull-wing doors like the Osiris, RE-7B and Stirling GT, which carry part of the coloured roof panels. There are also small mirror wings and frames near the black separation that are finished in carbon fibre.

On the rear of the main cockpit, the rear window is split in two by a large strip of carbon fibre, which starts from the roof area and goes all the way towards the rear end, together with two large integrated fins starting from the rear portion of the cabin and going towards the rear fenders, in a similar manner to the FMJ. The cockpit of the vehicle curves to the very end of the back of the car, where it narrows into a small section between two black exhaust housings. There is also an openable hatch directly behind the split rear window, which reveals the engine bay. There is also a large built-in mechanical spoiler that is mounted between the rear fenders, which doubles as an airbrake and the halves tilt when the car turns, while the top of the fenders have black sections originating from rear-exit vents.

The rear of the vehicle is very exposed in that no bumper is seen hiding the rear fascia, having an hexagonal section on the centre which is a small grille with the license plate fitted within. Beside the centre, there are two rectangular exhausts tip, which are located withing the black housings next to the engine bay, as well as modern horizontal lamps on the end of each fender, right above the carbon-fibre mountings of the mechanical spoiler. On the lower area, a small 5-element upper diffuser can be found, and underneath it, a larger full-width carbon-fibre diffuser can be found as well. A small orange racing tow hook can be seen placed directly underneath this diffuser. Its entire underside is carbon-plated for aerodynamics, more so than the Cheetah, as even the front and rear differentials are plated over. Because of the adjustable shocks, the suspension is extremely low, giving the car one of the lowest profile designs in the game.

The interior is mostly composed of carbon fibre, found around the dash, gauge cluster and central console. By default, the vehicle gains a dark-red interior around the front of the cockpit, directly under the window. Red can also be seen down the door panels. It was originally completely new and unique to this vehicle, but has since been used in several high-end super cars, including the Vagner and Visione.

The X80 Proto allows several colour combinations, where the primary one is applied on the centre of the front and most of the rear body, while the secondary one is applied on the fenders, the intakes leading to the engine bay and the stitches found in the interior. A trim colour is available for the dashboard, part of door panels and the seats, as well as an accent colour for the thin lines passing through the sides and the details on the wheels. The car uses unique wheels with five split spokes and black colour, wrapped in low-profile tyres.

As expected, the X80 Proto is one of the best performing cars in the game. The car's exposed bodywork and carbon-fibre usage gives it very little weight; comparable to the Panto and Futo. As well as this, traction is equally as good due to the all wheel drive layout. The vehicle's powerful engine gives it a high top speed, higher than that of the Adder by 1km/h. The car also has rapid acceleration, although several other super cars, such as the Emerus and Krieger beat it out in this field. In terms of handling, the car is equipped with separate rear flaps which individually lift up and down according to both acceleration and cornering, in a similar manner to the T20. This gives the car excellent stability and control in cornering, however the overall low weight and phenomenal power still prove too much in some instances, and cause the vehicle to spin out. The flaps also serve useful in braking situations. The car's exposed bodywork mean it is incredibly vulnerable to damage and tires being shot out, unfortunately. The car is also prone to slight oversteer when cornering at high speeds, and reducing the revs and throttle mid-way through a corner can often result in slight loss of control, but this can be easily recovered by maintaining around 6000 revolutions around corners.

The engine cover/cam cover design appears to be reused from the Furore GT and Rapid GT, appearing to be a V8 engine. The engine sound, while hard to summarize, is similar to Formula 1 racing car engines, an extremely high revving engine, which seems to have the sound of a supercharger whine. Because of the high power of the engine, and the excessive amount of revolutions per minute, the car tends to backfire when downshifting. Constantly hitting the brake when at high speeds can result in large backfires which have a louder sound than any other backfires on vehicles.

This makes it, at stock, one of the faster vehicles in the game, in a straight line, tied with the Nero Custom, however when modified, vehicles such as the Banshee 900R and Pariah will exceed this speed, even if the X80 Proto is upgraded too. 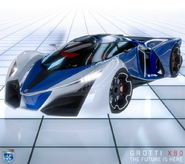 The X80 Proto in an official screenshot. 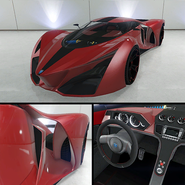 The X80 Proto on Legendary Motorsport.

The X80 Proto on the Rockstar Games Social Club.

The X80 Proto on the updated Rockstar Games Social Club.

The X80 Proto in a Cinematic preview on Rockstar Games Social Club.