Grand Theft Auto IV [LCPD]
Grand Theft Auto: Chinatown Wars
“Nothing says "Nobility" like murder, theft, and kicking someone when they are down.”
— Wu "Kenny" Lee

Wu Lee was born in 1960 in China. He was the younger brother of Mr. Lee, the boss of the Lee Family and the favourite to succeed Hsin Jaoming as head of the Liberty City Triads, and the uncle of Huang Lee. Wu moved to Liberty City in the mid-1990s and opened a restaurant called Sum Yung Gai in Cerveza Heights. He also earned the nickname "Kenny". Kenny was arrested in 1996 for possession of stolen property, in 1998 for petit larceny, in 2001 grand larceny, in 2002 for Arson and in 2006 for extortion.

He is the leader of the Lee Family who operates out of the Sum Yung Gai restaurant in Cerveza Heights, and occasionally out of a warehouse in East Island City.

Wu is the uncle of Huang Lee, the protagonist of Grand Theft Auto: Chinatown Wars. He is suspected to be the second most powerful Triad in Liberty City. With current Triad boss Hsin Jaoming's retirement quickly approaching, Lee is one of the main contenders for the position as his successor. As it turns out, he killed Huang's father (in order to get the Yu Jian Sword) and was the FIB informant that the Triads were looking for, but this isn't revealed until near the end of the game.

When Huang first arrives in Liberty City, he is attacked and left for dead by gangsters who stole the sword. Huang escapes and tells his uncle what happened. It turned out Wu wanted to give the Yu Jian to Hsin to cement his position as successor. Because of the loss, Wu was dishonored and he and Huang struggled to keep business afloat.

Later, Hsin and Huang try to find the FIB informant causing trouble for the Triads. Hsin suspects Huang and attempts to kill him, but is stopped by Wu. Wu convinces Hsin to give Huang time to find the real informant, bringing haste to the mission. During the search, Wu places "evidence" that narrow the search down to Zhou Ming and Hsin's son, Chan. Disgraced by the fact that his own son is an informant, Hsin steps into retirement and appoints Wu as the new head of the Triads. Later, Huang kills the two suspects.

Near the end of the game, Huang's own police connection, Wade Heston, reveals that the rat is still out there, and holding a meeting with his allies. Huang and Heston drop in on the meeting and Wu is revealed to be behind everything. Wu tries to explain himself, but Huang won't listen. Heston tries to arrest Wu, but Wu orders his men to kill them. Huang and Heston fight their way out, while Wu flees. Huang and Heston chase Wu across the city, by boat and by car before Wu stops at Hsin's house. In a confrontation, Hsin demands Wu to hand over the sword, and Wu responds by stabbing him, injuring him gravely. Huang arrives and kills Wu. Hsin then appoints Huang as head of the Triads.

He has an entry in the LCPD Database in Grand Theft Auto IV.

Wu is depicted at the first glance to be a caring uncle, trying to teach Huang the true values of being a triad. He is known to speak in an archaic way in almost any situation, even to the point Hsin Jaoming criticised him for that. Despite appearing as a good person at first, he betrays the Triad to secretly become its leader, showing his true manipulating nature.

NOTES
- Believed to be the second most powerful leader in the Liberty City Triad Organization.
- Considered the chief rival for Chan Jaoming in the struggle for control of Triad Organized Crime in Liberty City. 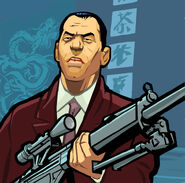