• ­Deliver the Oppressor to the drop off.

Out of lives.
Oppressors destroyed.

"Using Oppressor bikes, take down a rogue Company Mobile Operations Center at our own HQ. The target will have ground support and be utilizing deceptive techniques. Equipment should be returned on completion of task."
―Description

Work Dispute is a Mobile Operations mission featured in Grand Theft Auto Online as part of the Gunrunning update.

The team starts inside a Cargo Plane with their Oppressor bikes retrieved before and are immediately ordered to leave the plane.

Through the radio, Agent 14 explains that they are going to solve "a little work dispute" and are tasked to destroy rogue MOCs (apparently used by rogue IAA agents) and getting the bikes back in order to avoid any evidence of his involvement in the operation.

The first location is in Terminal, where two MOCs are marked in the radar and have to be destroyed. As the team reaches to the point, enemies will arrive in Insurgent Pick-Ups, as well as Valkyries as air support (two at the start and two more when attacking the ground units).

Once the trucks are destroyed, Agent 14 discovers that those are decoys and that the real truck is moving through the city. As soon as the truck's location is revealed, a 3-star wanted level is triggered, forcing the team to use other means to reach the MOC and avoiding LSPD reinforcements. Once they reach the objective, several Insurgent Pick-Ups are seen escorting the truck, so they need to be careful in order to destroy the escorting vehicles before taking out the truck.

After the truck is destroyed, Agent 14 orders the team to evade the law enforcement and retrieving the bikes back to a drop-off point, located in a site on Grand Senora Desert, on a dirt road connected to Senora Road. Once the bikes are delivered, the mission is completed.

Official release screenshot of the mission.
Add a photo to this gallery 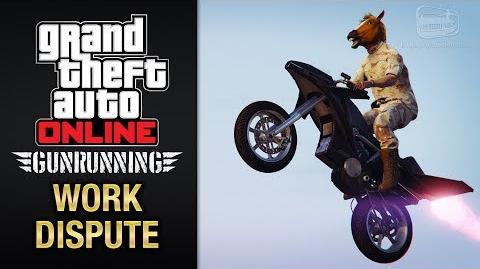 Retrieved from "https://gta.fandom.com/wiki/Work_Dispute?oldid=1191291"
Community content is available under CC-BY-SA unless otherwise noted.