Standard White - 100%
“Before your rat bike spent a decade or two submerged in raw sewage it looked like this: clean, classy, without a trace of rust or even the faintest whiff of hobo piss. But though it lacks character, you'll have more than thirty seconds to live if it comes into contact with an open wound, so there's a bright side too.”
— Southern San Andreas Super Autos description.

The Western Motorcycle Company Wolfsbane is a cruiser motorcycle featured in The Lost and Damned and Grand Theft Auto Online as part of the Bikers update.

The Wolfsbane is based on a Harley-Davidson 1200 Custom, seen in the body, fenders and exhaust layout.

The front of the bike features a small mudguard attached to the fork legs and a circular headlight attached to the lower triple clamp, followed by twin mounts holding the handlebars. The main body features a dual lower frame, a fuel tank with the WMC logo on either side and a black leather seat over the square-shaped oil tank and the rear fender, while the engine features an air filter and exhaust pipes on the right side. On the rear area, dual frames can be seen on either side of the rear fender, holding the suspension springs for the rear swingarm, along with a rear square tail light. A chain drive connects the rear wheel with the rest of the transmission systems.

The Wolfsbane, along with the Angel, can be found in two different variations:

The primary color of the bike is applied on the fenders and the fuel tank, while the secondary color seems to be applied on the sides of the large fuel tank (which is always set to black). It uses a set of wheels similar to choppers like the Daemon and the Wayfarer.

The beta version exists in the PC version of Grand Theft Auto IV, being almost identical to the one found in TLAD, and also features two fuel tank extras. Some key differences are the taller handlebar mounts, the gold "Wolfsbane" badges on the oil tank and the rear license plate, but lacks the manufacturer badges on the fuel tank. Its tires seem to be less worn out.

The vehicle returs to Grand Theft Auto Online with an almost identical design, but assumes a front girder design and springer front end, as well as a smaller headlight and omitting the front fender. The fuel tank no longer features the manufacturer badges and the oil tank appears to be a bit larger, along with a teardrop-shaped air filter and twin independent exhaust pipes on the right side of the engine. The main seat appears to have a more rugged texture and the chain drive is mostly covered, as well as lacking the rear foot pegs on the swingarm. Like other motorcycles featured in the same update, the Wolfsbane features a protruding primary drive with an Atomic-branded belt, as well as a chain drive, which are fully animated. It uses the same "Chopper" dial set as bikes like the Innovation and the Police Bike.

Color distribution is a bit changed, where the primary one is applied on the rear fender and the fuel/oil tanks, while the secondary color is applied on the forks, handlebars, main frame, rear swingarm and cover, and a detail around the rear light. The wheels appear to be similar to the "Bobber" rims available in Los Santos Customs, wrapped in high-profile tires with a more detailed tread pattern in comparison to the TLAD iteration, with the rear tire being thicker in appearance.

The Wolfsbane is comparable to the Daemon in terms of performance, with an average top speed, a rather impressive acceleration and good handling. The bike also seems to maintain better control on dirt roads, as it does not suffer from excessive wheelspins or loose control, making it a decent choice for getaways through uneven terrain.

The Wolfsbane uses a chain-driven, V-twin internal combustion engine with a 5-speed manual transmission, as evidenced by the foot-actuated gear shifter. It also shares the same engine sound with the Hellfury.

The Wolfsbane performs more or less identical to the TLAD iteration, but has a seemingly poor turning radius, which requires the use of brakes to circumvent this.

Again, the Wolfsbane uses a chain-driven, V-twin internal combustion engine with a 5-speed manual transmission, as evidenced by the foot-actuated gear shifter. Its engine sound seems to be a variation of the one used on the Zombie Chopper and its Bobber variant, with an extra louder engine tone. 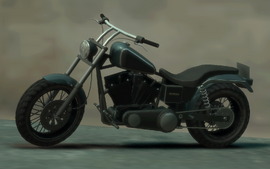 The beta Wolfsbane in GTA IV. 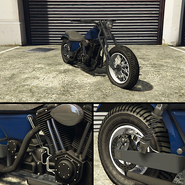 The Wolfsbane on the updated Rockstar Games Social Club.

The Wolfsbane in the cinematic preview on Rockstar Games Social Club.

The Wolfsbane is one of the rarest choppers in the game, spawning at certain locations and with certain conditions.