Wing It is a computer program advertised in Grand Theft Auto IV.

It is a presentation program created by Facade in 1997 and subsequently expanded into a full-fledged productivity suite (e.g., word processor, spreadsheet, etc). As Facade is based on Microsoft, Wing It is based on PowerPoint, a core component of the Microsoft Office suite. The term "wing it" is an idiom meaning to improvise, suggesting that many computer-made presentations are created on the fly. The manufacturing company, Facade, is also part of the joke.

Wing It Presentation is referenced in the The Lost and Damned mission Roman's Holiday.

The Further Adventures in Finance and Felony update for Grand Theft Auto Online features an addition of executive offices, with the assistants' computers running a Wing It word processor with an interface similar to that of Microsoft Office 2013. 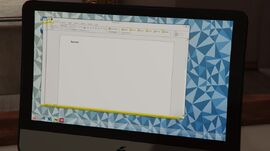 Wing It running on a computer in GTA Online.
Retrieved from "https://gta.fandom.com/wiki/Wing_It?oldid=1241062"
Community content is available under CC-BY-SA unless otherwise noted.