windsor2
“A luxury coupe that screams BDE. Let the city know who works hard, parties harder and rear-ends hardest.”
— Career Builder description.
“How do you improve on something as flawlessly pompous as the Enus Windsor? The answer is something you need to experience to believe: so hop inside, mash the touchscreen interface, feel the canvas roof glide away above you, and gaze in triumph at all the lowly pedestrians as your appalling toupee flutters away in the 30mph breeze.”
— Legendary Motorsport description.

The Enus Windsor Drop is a four-door luxury convertible variant of the Windsor, featured in Grand Theft Auto Online as part of the Further Adventures in Finance and Felony update.

The vehicle shares the same design and features as the regular Windsor, but gains a four-door bodystyle, resulting in an extended wheelbase. It also gains a soft top that folds up until where would be the B pillar (between the front and rear doors), before folding backwards and retracting into itself under a small rear compartment just in front of the boot, which has a wooden finishing. The vehicle lacks full B-pillars in between the doors, but a door post can be found when both doors are opened, in order for the rear door to be hinged from. Compared to the standard Windsor, the Drop variant has thinner/smaller headlights. It also retains the beige leather interior and the wooden panellings from the regular Windsor.

The Windsor Drop does not have options for livery wraps like its two-door equivalent. Instead, it assigns a tertiary colour for the roof, while the colour distribution on its bodywork is identical (primary on body, secondary on bonnet and boot).

The car performs similar to the Windsor, having a large amount of power, but in conflict, a large amount of weight to pull. The car has an excellent top speed, but acceleration is limited due to the rear wheel drive layout, weight distribution and lack of traction in the tyres. The longer wheelbase makes it harder for the car to corner, however its turning radius isn't changed majorly.

The engine sound remains the same, as does the engine model and cover, as the original Windsor, sounding smooth. In terms of engine models, the car sports an engine cover depicting a single-cam V8, with no clear 3D model underneath.

The Windsor Drop with its roof up. (Rear quarter view)

The Windsor Drop as seen in the Further Adventures in Finance and Felony update trailer. 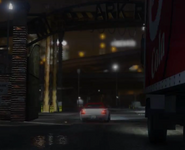 Rear of the Windsor Drop. 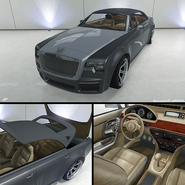 The Windsor Drop on Legendary Motorsport.

The Windsor Drop on the updated Rockstar Games Social Club.

The Windsor Drop in a cinematic preview on the Rockstar Games Social Club.

The Windsor Drop badge used on the advert.