GTA Wiki
Register
Don't have an account?
Sign In
Advertisement
in: Characters, Characters in The Lost and Damned, Determinant Characters,
and 3 more

Gregory Johnson
Willy "Wetbacks" is a character in the Grand Theft Auto series who appears as a minor character in The Lost and Damned.

Willy is a resident of Liberty City and a Hispanic member of the The Lost MC, Willy and Brian are in a feud during the game.

The feud drives Willy to side with Johnny during the inner beef between the Jeremy Biker Gang and Johnny's Crew.

Willy is usually the bartender at the Lost MC Clubhouse, and referred as "Willy Wetbacks" by Brian.

He can be toughen up if he'll survive either storyline missions or gang wars; he is killable, and if he'll get killed he would be replaced by another member while a photo of him will be placed on the clubhouse's memorial wall. 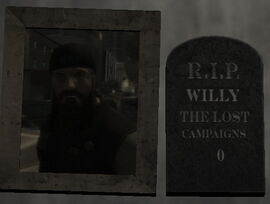