Yes
“High strength carbon fiber frame, super-stable fork, alloy rims, this road bike will let people know you are serious about a sport made obsolete by combustion engines years ago. Get serious about working out by spending a lot of money on gear right now.”
— Pedal and Metal Cycles description.

The Whippet Race Bike is designed as a traditional race bike, but has various elements from many real life models. The front forks are similar to the Pinarello Dogma Series race bikes, while the curved down tube is an altered version of a Tour Grade Starline R12. The curved seat and top tube appears to be borrowed from a De Rosa SK 8050, and the chain stays look similar to a Focus Izalco Race bike. The drivetrain is likely a 2x1 setup, as seen by the drivetrain visible in-game. This is strange for a competitive mountain bike, as race bikes often posses around 8 to 12 rear cogs and one front chainring. In addition, the bike has no shifting paddles on its handlebars, and only features brake levers. This means that the smaller front chainring and the derailleur are completely useless, as there would be no other way to change gears other than manually lifting and placing the chain into place by hand. This is likely a development oversight.

The Whippet Race Bike features a white and yellow livery, bearing the "WHIPPET" markings on the down tube. Its wheels are painted in black with white stripes, along with "K9 Speed" markings on it. 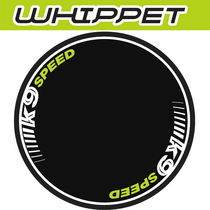 The Whippet Race Bike is one of the fastest bikes in the game, as it is able to reach a decent speed, but is unsuitable for stunts. When repeatedly pressing the corresponding button, the character' stance changes, improving top speed slightly at the cost of reduced steering capabilities. 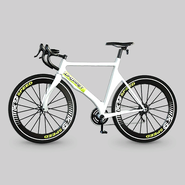 The Whippet Race Bike on Pedal and Metal Cycles.