"We deal with counterfeit chips all the time, but thanks to some proactive interrogation on the part of our house detectives, now we have an address for the factory. We need you to act fast, and off the books, if you don't mind."
―Agatha Baker's briefing.

"We've seen a spike in counterfeit chips over the last fourty-eight hours. Our house detectives just got an address for the factory, but if we go to the feds, it'll be another week before anything gets done. Head down there and persuade them to close up chop, won't you?"
―Alternative briefing.

When the Chips are Down is a Casino Work mission featured in Grand Theft Auto Online as part of the The Diamond Casino & Resort update. It is a freeroam mission given to the player by Agatha Baker.

The player needs to go to the location of the chip factory, which is in Davis, Elysian Island, or La Mesa. The factory will be guarded by a large amount of enemies, which the player needs to take out. Once all enemies are killed, the player is tasked with destroying stamping machines and chip cases. The former can be destroyed using explosives (such as the sticky bombs given at the start of the mission), but the latter can be destroyed even with bullets.

Once all the machines and chip cases are destroyed, the player must leave the area. Once they do so, the mission ends and Agatha calls them to commend them for their good work.

"Good job, one less headache for the time being."
―Ms. Baker

"Remember, this operation technically doesn't exist. So if you were to destroy their whole stock, you wouldn't technically be committing a crime."
―Before arriving at the location. 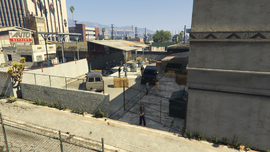 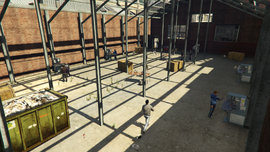 Retrieved from "https://gta.fandom.com/wiki/When_the_Chips_are_Down?oldid=1182927"
Community content is available under CC-BY-SA unless otherwise noted.