Western Motorcycle Company (often shortened to simply Western) is a motorcycle manufacturer in the HD Universe of Grand Theft Auto. 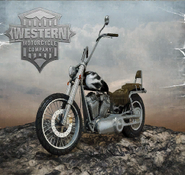 A Western Motorcycle Company poster featuring a Wayfarer.
Add a photo to this gallery

Retrieved from "https://gta.fandom.com/wiki/Western_Motorcycle_Company?oldid=1154146"
Community content is available under CC-BY-SA unless otherwise noted.