View source
watch 02:46
The Quarry - The Loop
Do you like this video?
Play Sound
For the neighborhood in Grand Theft Auto: San Andreas, see East Beach.

West Beach is a beach party area in Cayo Perico, Colombia, which appears as an infiltration point for The Cayo Perico Heist in Grand Theft Auto Online.

West Beach is one of the main locations on Cayo Perico the GTA Online Protagonist visits, and is the starting point for efforts to scope for intel on the operations carried out on the island. It is also the location of a beach party, providing a distraction that the player can use to sneak past guards and through a gate to begin exploring the wider area.

“Well now, what do we have here? Sand sculpture... but it looks familiar, no? I wonder if the people here have ever... No, it is not possible. Not this far south. Excuse me, kapitan. I was just thinking out aloud.”
— Pavel to the GTA Online Protagonist.

A sculpture of the Loch Ness Monster made of sand can be found behind the bar at the Cayo Perico Beach Party. The player can photograph the sculpture and send the picture to Pavel, who will comment on it. His comment foreshadows the creature's appearance in The Cayo Perico Heist finale.

“You know who uses this type of helicopter? IAA. So, the rumors were true, after all...”
— Pavel to the GTA Online Protagonist.

A wreck of an IAA Buzzard can be found on top of the cliff between West Beach and the Main Dock. The player can photograph the helicopter and send the picture to Pavel, who will comment on it. Its location can only be reached by using the parachute from the top of the Communications Tower or after leaving the compound during the heist finale.

“Well, well. A guest at the last party, perhaps. Just think, if we do not pull this off perfectly, we too will be found like this...”
— Pavel to the GTA Online Protagonist.

On the same clifftop as the IAA Buzzard, a skeleton can be found on the rock promontory just north of West Beach. It is only visible from the clifftop above. Pavel suggests this was a previous beach party guest who didn't follow the rules. This is confirmed in overheard guard dialogue during the heist itself. [1]

The beach in the trailer. 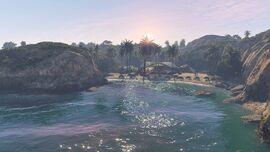