No
“You could pop up in a mood ring, rock a stack perm, roll a doobie and crash the stock market. Or, for a faster 70s vibe fix, you could just purchase the Weevil. Some fashions are timeless.”
— Southern San Andreas Super Autos description.

The BF Weevil is a compact car featured in Grand Theft Auto Online as part of The Cayo Perico Heist update.

While the Weevil was originally released in the aforementioned update, it was not available until December 22, 2020, during the Holiday Bonuses 2020 event, where players could obtain it as a reward for completing certain requirements. It was later available for purchase on January 7, 2021, during the Weevil Week, with a discounted price for those who completed the aforementioned requirements.

The Weevil is heavily based on the Volkswagen Type 1 "Beetle", combining elements from across the Beetle's production timeline with minimal deviations from the original design. The vehicle's front fascia is based on pre-1954 Beetle models. Its rear split window, in size and shape, appears to be a compromise between both pre-and-post 1953 designs, while its small-sized tail lamp cluster is most likely based on pre-1961 models[1], and its vented engine hood and interior is based on 1950-60s models. The stock Weevil omits the Beetle's characteristic running boards (which can be restored at Los Santos Customs) and features simplified bumper designs not seen on any production model Beetle. The Weevil also omits the Beetle's distinctive front bonnet handle.

While the Weevil seems to share the body style and some of the initial features from its off-road equivalent, the Injection, it appears to be modeled entirely from scratch. The front end features a small chrome flat bumper with a number plate at the centre, while a set of circular lamps with chrome trim can be seen on the outer sides, with the outer ones being the headlamps and the inner ones amber signals. The bonnet area features a curved compartment with details similar to the front of the Injection, albeit more in-line with the rest of the compartment (Weevil, like the Beetle, has its trunk in the front where the engine customarily resides, with the engine instead at the back). Said bonnet opens to reveal a spare wheel and a small luggage compartment, along with essential components above.

The sides of the car feature wide fender arches, though still smaller compared to the Injection's bulky off-road fenders, while chrome trims are seen running across the vehicle. The cabin area follows the same shape and window layout as the Injection, but various differences can be found between these, being the straighter windows, no inner pillars on the door windows, and the larger split rear window with a flatter bottom. The doors are somewhat similar to the ones on the Injection but make use of traditional chrome handles and square-shaped rear-view mirrors.

The rear of the car is mostly predominated by the curved engine compartment, which features a vented section above the number plate section and a single handle on the bottom. The fenders have black housings with twin tail lamps, with the upper ones being red lamps and the lower ones turn signals. The lower area is basically composed of a chrome flat bumper and the twin exhaust tubes below. The underside is rather generic like most cars, but features a detailed suspension setup likely intended for off-road configurations, with the front axle being a chrome beam with suspension shocks and springs, steering rack and trailing arms, and the rear axle having dedicated control arms and transmission shafts for each rear wheel.

The interior of the car is rather unique, featuring a vented unit at the centre and a glove compartment on the passenger side. The driver side makes use of "Dominator" dials, arranged in a way that the main gauges are beside the smaller fuel gauge, all of them above the steering column.

The primary colour of the car is applied on the portions above the chrome details, the outer portion of the spare wheel rim, the interior and the inner sections of the seats, while the secondary colour is applied on the portions below the chrome details and the outer portions of the rims. A trim colour is also available for the central mirror, doorcards, outer portions of the seats, and inner roof area. It uses a set of wheels similar to the "Classic Rod" rims available in Los Santos Customs but with high profile tyres, narrower rims and wider hubcaps.

Keeping with the original Volkswagen Beetle's reputation as a highly versatile, adaptable and customisable platform, there are over 90 modification options available for the Weevil. The plethora of options allows the car to adopt one or more of a variety of custom Beetle designs, each referring to a subculture or trend in which the Beetle was prominent. Options include a Cal-Style VW, Cal looker, hippie art car, dragster, Baja Bug, Volksrod, or rat rod profile, as well as a classic show car or a conventional motorsports design. The "Blackout Covers" option and camouflage liveries intend to evoke designs from the World War 2-era military Type 82/E Kübelwagen and Type 87 Kommandeurwagen.

The Weevil's commitment to its inspiration continues in its handling. The Weevil is light with characteristically soft and bouncy suspension, making it easy to chuck around in city streets. Acceleration is slow, its top speed is low, and considerable distance is required for it to slow to a stop. Uniquely, the vehicle has the ability to wheelie, being only the second non-muscle car after the Tornado Rat Rod (Sports Classics) able to do so, and it can also use this ability to assist acceleration, which is different from the latter.

Like the Injection and the BF off-road buggies, the Weevil is powered by a single-cam, Flat-4 engine with fully-animated timing belt and pulleys, coupled to a 5-speed gearbox in a rear-engine, rear-wheel-drive layout. It shares the same engine sound as the Issi Classic and Brioso 300, albeit with a slightly lower pitch. 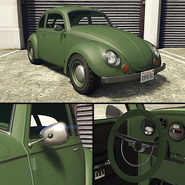 The Weevil in the cinematic preview on Rockstar Games Social Club.

Vintage poster advert for the Weevil.