Hostile Negotiation
No Way on the Subway

In-game time
“It's Bernie now. After I came here, I wanted a complete change. So I became Bernie Crane.”
— Florian Cravic

Weekend at Florian's is one of the final missions Ray Boccino gives Niko Bellic in Grand Theft Auto IV. In this mission, Niko uses the help of Ray's aquintance, Talbot Daniels and Roman Bellic to find Florian Cravic, a man he suspects killed his friends in the Bosnian Wars, one of the two men Niko has spent ten years looking for. The other man was Darko Brevic.

Toward the end of Ray's missions (and providing the Middle Park East safehouse has been unlocked), Ray gives Niko a call with information on Florian Cravic, a man Niko suspects betrayed the military unit. Niko calls Roman to help locate Talbot, the man that Ray said knows the location of Florian. Niko and Roman drive to Star Junction in Algonquin. During the ride over, Roman tells Niko that he sometimes plays cards with Talbot. Roman and Niko find Talbot on a busy street, looking at a canvas.

An in-game cutscene shows Roman and Niko talking to Talbot, and the player must obtain a four-door car to transport them. Niko drives to Florian's apartment near the corner of Ivy Drive South and Pyrite Street, Middle Park West with Talbot's help and a cutscene ensues. 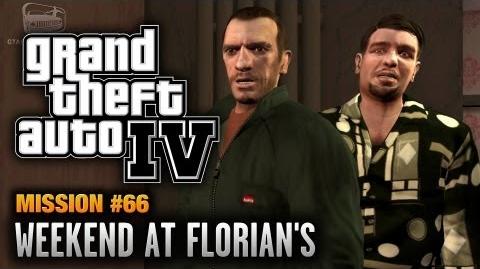