• ­Destroy one of the cars to get the gang's attention.

• ­Take out all the attacking gang members.

• ­Attack the gang at another hang-out.

• ­Lure them to a more remote location.

• ­Get away from your pursuers.

Heston: "If we're going to find out what the fuck is wrong with those Koreans, we're going to need some proper information. None of my contacts know shit about them. We need to put a bug inside a gang-house."
Huang: "Sounds easy enough. Maybe I should just walk up and ask one of them to let me in and plant it?"
―Wade Heston and Huang Lee making plans

Weapons of Mass Distraction is a mission given to protagonist Huang Lee by Personal Investigator Wade Heston in Grand Theft Auto: Chinatown Wars.

The IAD are all over Heston! He needs a big bust to clear his standing with them. In order to gain information, Heston is going to plant a bug in their base. Huang's job is to create a diversion whilst Heston does so.

It's good to have some Molotovs for this mission, as they help. Head down to the indicated location and stop in the yellow marker. Once there, you will need to destroy one of the cars parked outside the building. Throw one or two molotovs at one to destroy it. After that about ten Korean gangsters will exit the building, kill them all. Next you will need to cause mayhem at two more locations. Head to either one, you will then need to eliminate all the Korean gang bangers at that location, watch out for Koreans looking for revenge on your drive over! After that head to the next location and kill all the gang bangers. Once they are all dead you will need to drive to the indicated position to lead them away. Once you are there, you have to jump into the water and get into the nearby boat. After that it's mission complete.

There is no monetery reward for this mission, however the next mission, Street of Rage is unlocked.

"IAD are breathing down Heston's neck, but not hard enough for my liking.

He needs a big collar, fast - or he's screwed. And if I don't help him he'll make sure I'm screwed.

So, while he planted a bug in a Korean hideout, I lured them out of the area." 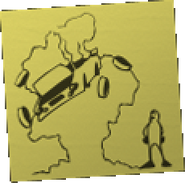 Weapons of Mass Distraction
Add a photo to this gallery 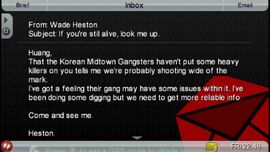 Heston sends an e-mail to Huang asking to meet him at the warehouse in Industrial. 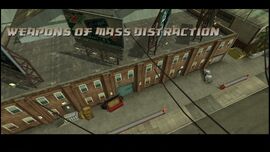 Arriving at the warehouse. 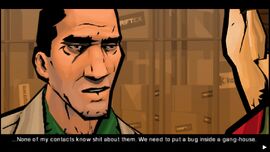 Heston tells Huang that none of his contacts have information about the Midtown Gangster, so they need to put a bug in the Korean's hideout. 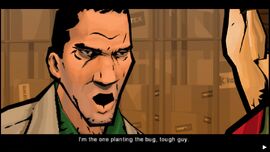 Heston's gonna plant the bug in their hideout... 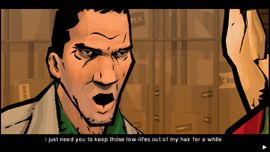 ... while Huang creates a diversion. 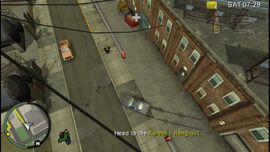 Leaving the warehouse and heading to the Korean's hang-out. 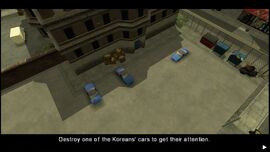 Arriving at the Korean's place. There are three Korean's cars Huang can destroy to get their attention. 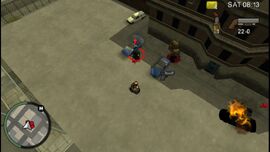 Huang destroys one of the cars and kills some Midtown Gangsters. 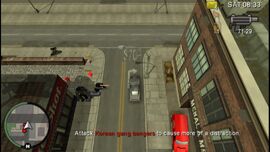 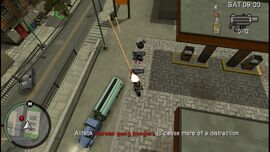 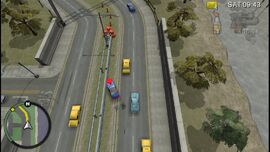 Luring them while Heston plants the bug. 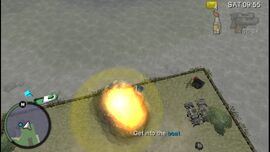 Huang lures the Korean to a beach and finds a boat. 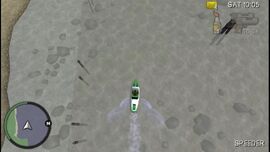 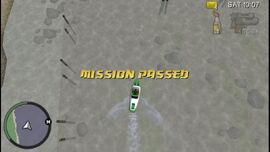 Retrieved from "https://gta.fandom.com/wiki/Weapons_of_Mass_Distraction?oldid=1135698"
Community content is available under CC-BY-SA unless otherwise noted.