Standard White - 100%
“Back in the 60's a heavy muscle car with a reinforced frame seemed like a great idea because of all the drunk driving you needed to do. Still, perfect though it seemed, a part of you whispered the car was missing something - and trust us, when you see that sturdy foundation supporting a top-mounted minigun the final piece of the jigsaw is going to slot right into place. Throw in some industrial-grade armor and the Tampa will finally have achieved its full potential.”
— Warstock Cache & Carry description.

The Declasse Weaponized Tampa is a two-door muscle car featured in Grand Theft Auto Online as part of the Gunrunning update.

The car appears as an armed variant of the Tampa, featuring a roof-mounted Minigun as standard. The concept can be said to take inspiration from the Roadkill, a weaponized muscle car featured in the Twisted Metal series. Roadkill was a nod to the protagonist vehicle from the 1997 vehicular combat game Interstate 76, which featured a nearly identical weaponized muscle car complete with a roof-mounted machine gun for the player to use during the main quest.

The vehicle itself features visual changes over the regular model; its stock colors are primarily worn to suit the vehicle's nature, and the car lacks an option for a secondary color. The stripe down the side of the original Tampa has been removed, and chrome fittings, such as the mirrors, door handles and window pillars and trims, are replaced with black counterparts. The Tampa's vinyl roof is also replaced with a solid roof. The 310GT badge on the side of the car remains, although it is slightly faded. The vehicle can be fitted with several unique modifications not present on the regular model, being external protective frames, armor plates, and camo liveries.

The primary color of the vehicle is applied to the entirety of the vehicle and the interior stitching, while the secondary color is applied to the miniguns, missile launchers, and the mortar's muzzle and ammo compartment (if these are present). The stock wheels are the same ones from the regular Tampa, being variations of the "Revolver" muscle rims available in Los Santos Customs, fitted with medium-profile tires.

As stated before, the vehicle is equipped with a roof-mounted fixed minigun that resembles a GAU-17/A gatling gun. It can also be modified to equip four front missile launchers, a swiveling dual-gun remote turret and dual rear mortar launchers that appear to be an altered EIMOS integrated mortar system.

The Weaponized Tampa is one of the fastest weaponized vehicles, performing slightly better than its normal counterpart, thanks to its higher speed. Handling remains average compared to the standard model, but has better response on bumpy roads, curbs and uneven terrain due to the all-wheel drivetrain, at the cost of oversteer at medium speeds. Its increased weight means a slightly better ramming power against cars with similar or lower mass.

Like the regular Tampa, the vehicle is powered by a 310 cubic inches (5.1 liter) V8, positioned in a front-engine, all wheel drive configuration (1/4 of the engine power to the front wheels and the rest to the rear wheels) and coupled to a 4-speed gearbox. The engine also has a mounted cylindrical air filter by default. It shares the same engine sound as the regular Tampa, being a variation of the one from cars like the Buccaneer, the Blade and the Nightshade, also featuring a supercharged sound effect that is amplified when the "Turbo" upgrade is equipped.

The armor upgrades add armor plated panels and bullbars to the vehicle, although the occupants are still exposed to gunfire and the car can still explode with a single explosive. However, it can withstand other vehicles exploding next to it when shot by the minigun, giving the occupants some time to leave the vehicle before it explodes.

The Weaponized Tampa makes up for its weak armor in having several weapons, all of them operated by the driver:

The Weaponized Tampa can only be modified at a Vehicle Workshop inside a Mobile Operations Center or Avenger.

A Weaponized Tampa appearing alongside a Phantom Custom. Other vehicles seen are the Dune FAV, Half-track and APC.

A red Weaponized Tampa leaving an MOC in the offical artwork.

A Weaponized Tampa with the Dual Remote Minigun upgrade.

A Weaponized Tampa with the Front Missile Launchers upgrade.

A Weaponized Tampa with the Rear Firing Mortar upgrade. 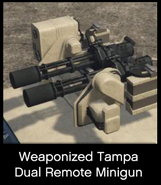 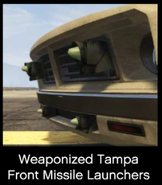 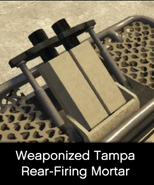 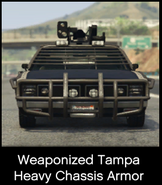 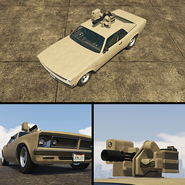 The Weaponized Tampa on the updated Rockstar Games Social Club.

The Weaponized Tampa in the cinematic preview on Rockstar Games Social Club.