Standard White - 100%
“Looking to mount an amphibious assault on a country's militarized border or defend your humble seaside home? With a .50 cal gun at the front, this little dinghy will send a clear message to trespassers. Bullets and inflatables, do they really go together? You tell us!”
— Warstock Cache & Carry description.

The Nagasaki Weaponized Dinghy is a weaponized inflatable boat featured in Grand Theft Auto Online as part of The Cayo Perico Heist update.

The vehicle is essentially an armed variant of the Dinghy, sharing the same design, features and accessories. However, the engines have vented details and the seat backrests are an optional extra, while the radar dome accessories are permanent extras. The Weaponized Dinghy also features a pair of antennae that wobble and shake when the boat is in motion, which the standard Dinghies lacked.

The vehicle is armed with a shielded machine gun turret on the bow, which shares the same model as the rear turret of the Kurtz 31 Patrol Boat (resembling a Browning M2HB .50 caliber machine gun).

Like the regular versions, the Dinghy is powered by two outboard engines, emitting the same quieter sound.

Machine Gun: its only armament is a .50 caliber machine gun turret similar to the rear gun of the Kurtz 31 Patrol Boat and the stock gun of the Tula, offering a 90 degree coverage and a limited elevation of about 20 degrees. It has devastating power against pedestrians and unarmored boats, but remains a weak option against larger threats such as the Technical Aqua, the APC or the Stromberg and Toreador. Also, because of the boat's light weight, aiming is a bit difficult when navigating through stormy waves. 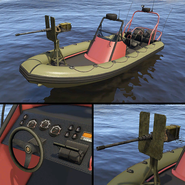