There are eight different slots in the Weapon Wheel:

In the middle of the weapon wheel, there is the weapon's name, the inventory place and total of the weapon type, and the attachments placed on the weapon. At the top right corner, stats are visible and a colored line will represent a certain enhancement (blue means increased and red means decreased). If a parachute is in the player's inventory, it will be shown on the bottom right of the wheel, next to the Sniper Rifle slot. After patch 1.16, the number "2" can be seen if there are 2 parachutes.

When activated, each slot shows the current ammunition of the weapon and a colored line that shows the actual weapon. The selector is represented by a highlighted slot, which when deactivated, the character will take that weapon. Not all weapons are able to share ammunitions, which depends of their technical aspects (i.e. Heavy weapons). 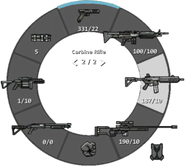 The weapon wheel in the original version of GTA V.

The first image of the weapon wheel, as seen in the GTA V gameplay video.

The updated weapon wheel in the enhanced version of GTA V.