Much like the real life new wave genre, Wave 103 assumes an intellectual, pop-art, post-punk nihilistic and technology-loving attitude. It celebrates the advance of digital equipment in music, through idents like "Who needs music with soul? We've got drum machines!" and "Who needs guitars? We've got little computer synthesizer thingies." The station also celebrates new wave's fashion quirks, like that "the boys wear more make up than the girls" and the "sexual ambiguity".

Its DJ, Adam First, acts like a connoisseur of modern music that knows vanguard British bands before they are known in the United States. He is a big fan of new wave acts and can mention years and dates about them. At one point, however, he voices his non-conformity with the fact that in the new era of video clips and MTV, the image of a band is more important than its music, something that comes at odds with the new wave essence, as the genre greatly benefitted from having a more visual medium where it could showcase its eccentric fashion aesthetics.

Prominent Appearances in the Storyline 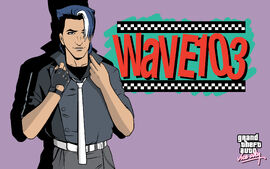