“Anyone who knows me will tell you I'm a firm believer in the US justice system - any system that imprisons the poor, and lets the rich go free is okay by me. Only there's one judge who doesn't understand how this country works. He's at the Marlowe Valley Vineyard. Take him out, and send a message.”
— Description.

Water the Vineyard is a mission in Grand Theft Auto Online given by Martin Madrazo to the player. It is available for 1 to 2 players.

There is a judge who is, according to Madrazo, very honest and upstanding. Naturally, this judge is threatening Madrazo's interests by rejecting the corruption within the judicial system of San Andreas. Madrazo tasks the player(s) with neutralizing this judge and documenting evidence of his death to "encourage" any others like him to rethink their positions.

The judge will be in the middle of the Marlowe Vineyards protected by a detail of bodyguards.

If alerted to the players' presence, the judge will escape in his black Jackal and the team will have to chase him. The judge drives semi-aggressively, so will exceed the posted speed limits and run red lights, but will not dangerously overtake normal traffic. He will initially travel east on Route 68. He has no destination and will continue driving until he is killed.

After killing him and taking the photo, two further bodyguards will chase the players in a Granger.

The chase is on.

End of the judge. 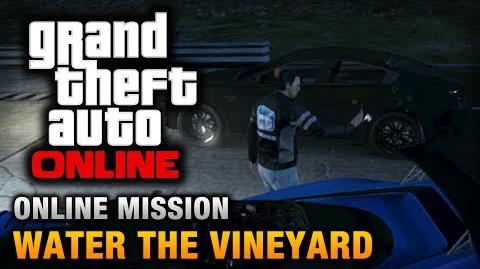