6 (driver, cab passenger and four passengers standing on the railings)

Standard White - 100%
“Remember your old flatbed truck? This is nothing like that. The Wastelander could carry your old flatbed truck across the surface of Mars without using even half the travel on its mile-high, man-eating suspension. Stick a few heavily armed friends in the back and it's time for some good, wholesome fun.”
— Warstock Cache & Carry description.

The MTL Wastelander is a cab-over engine off-roading truck featured in Grand Theft Auto Online as part of the Import/Export update.

The Wastelander is heavily based on the "Mongo" Heist Truck concept from Fast Five, seen in the overall design and purpose.

The Wastelander is depicted as a rusty flatbed truck, apparently recovered from salvage and modified with newer parts to make it fully operable. The truck's design is mainly composed of exposed frames with welded panels on them.

The front end is predominated by a front defense with four rectangular lamps on it, while the upper section of the cab is protected by a meshed screen with four additional lamps on the roof. The sides of the cab lacks any sort of doors, instead being accessed directly.

The rear section is predominated by the large bed with metal bars and panels on the sides. A set of winch cables derived from the Flatbed can be seen over it, which does not serve any purpose outside of scripted missions. Below the bed and between the wheels, some of the vital components, such as the oil tanks and the fuel tanks, can be seen, along with articulated bars and suspension springs for the axles.

The interior of the cab is devoid of any standard interior elements, other than a set of dials, switches, race seats and other components derived from race-style interior.

The truck only comes in a dark green primary color for the chassis and external frames of the vehicle, along with a matte desert brown/tan secondary color for the flat surfaces of the truck. This color set is fixed for the truck and cannot be changes through mod shops (unless recoloring it through the Content Creator). It uses large industrial wheels similar to the "Spooner" muscle rims (although more concave and having more bolts around the center), wrapped in high-profile tires with rugged tread patterns, similar to the Brickade and the Dune. 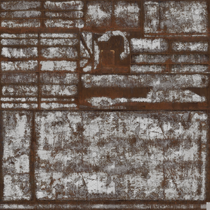 For travelling, the Wastelander proves to be very efficient, as the raised suspension and all wheel drive layout allows to sort uneven terrain with ease and to easily ford most rivers. The lightweight construction and the relatively short wheelbase makes the Wastelander able to achieve high speeds and be highly maneuverable. Also, as expected for a truck with large wheels and great suspension, the Wastelander can withstand a great amount of water depth; it can go as deep as its platform before the engine cuts off.

Its only downsides, however, are that the truck lacks ramming capabilities; due to the lightweight construction and high suspension, the truck may drive over small cars and lose control in the process, while larger cars may be pushed slightly, opposed to trucks like the Brickade or the Phantom. Because of the lack of doors, the occupants would be highly susceptible to gunfire and being hijacked by other players.

It is noted that the Wastelander can carry six occupants, with four of them standing on the railings of the back section. As with a Granger, Roosevelt or Brickade, these occupants can make use of Assault Rifles and Light Machine Guns, making the Wastelander a great transport/defense truck. They can also jump on the truck and be able to use any weapons without turning into a ragdoll, while able to take cover on the railings or metal plates.

The Wastelander on the Rockstar Games Social Club.

The Wastelander on the updated Rockstar Games Social Club.

The Wastelander in the cinematic preview on Rockstar Games Social Club.

A player firing from the rear of the vehicle; a drive-by position unique to the Wastelander.