“Is there a more iconic town car than the Washington? Own a piece of livery history! (Just don't loiter for too long at traffic lights or someone will get in the back and ask you to take them to the airport)”
— Southern San Andreas Super Autos description.

The Washington features a generally boxy yet contemporary design, resulting in the car being one of the newest cars at the time of Vice City's 1980s settings. For GTA San Andreas, the car remains largely similar, except for a 90's facelift, with the exception of wider headlight clusters, a modified front grille and rear light clusters that light up as a whole at night or during braking. While similar to the GTA Vice City rendition, the GTA Vice City Stories Washington sports additional side trims derived from the FBI Washington, implying the FBI Washington's vehicle model was used in place of the original Washington model from GTA Vice City.

The car normally spawns in a variety of single body colors. The Vice City Stories version of the Washington also spawns in white, which is not available in GTA Vice City.

In Grand Theft Auto IV, the Albany Washington is based on the 1998-2002 Lincoln Town Car, with a few cues from the 2000-2005 Cadillac DeVille. It features "Executive" badging, akin to the Executive Series trimmed Town Cars, and its wheels are also very similar to those found on 1998-2002 Executive Series Town Cars.

The overall design of the car is way less boxy than the 3D Universe renditions, having a rounded front bumper with a grilled section on the center, a black trim at the bottom and a license plate. The upper area of the car features the main grille and a set of wide headlights with small turn signals. An Albany ornament can be seen on the front of the hood.

The side have a similar profile to the 3D Universe iterations, having fender flares and chrome lines passing through the doors, along with black sections at the bottom. The greenhouse area features black, plastic-like trim around the windows, as well as rounded mirror wings near the A-pillars and "Executive" badges on the rearmost pillars. A small aerial mount can be seen on the passenger side, on the top part of the trunk.

The rear of the car bears an Albany badge on the end of the trunk, while the rear end has an inset area containing the license plate and silver lettering displaying the car's name, embossed on the passenger side. The outer edges of the car has large tail light clusters, each one consisting of large red outer lights and small, vertical inner lights, with black trim around the whole clusters. The rear bumper follows a similar profile to the front one, with a black detail at the bottom and two mouldings for the twin exhaust pipes.

The Washington can spawn in a variety of single colors on the body. It uses a set of rims consisting of a large dish with various small spokes around it.

The Washington is equipped with a GPS system with a female voice, but only if the player leaves the "selected cars" (default) option in the audio menu. It will also make an audible "door ajar" dinging noise if the player exits the vehicle but leaves the door open. It can be heard clearly in quiet areas with the volume turned up.

In Grand Theft Auto V and Grand Theft Auto Online, the overall design of the Washington remains unchanged from GTA IV. The "Washington" badge on the rear of the vehicle in GTA IV is removed, as well as the aerial mount on the trunk. The LED strips along the inset of its taillight clusters are more clearly defined when its lights are turned on.

In the enhanced version, the vehicle's interior is the Police/Taxi archetype used in vehicles such as the Fugitive and Premier, as well other vehicles analogous to the real-life Panther platform such as the Stanier-based Police Cruiser and Taxi. The Washington's interior is distinguished by additional wood (or wood veneer) paneling on the doors, furthering its Town Car references.

Again, the Washington can spawn in a variety of single body colors, and retains its wheel design.

Pre-Grand Theft Auto IV Washingtons are generally regarded as having only moderate performance, having an inline-6 engine coupled to a 5-speed gearbox in a front engine, rear wheel drive configuration, which is largely attributed to its bulky design. Its longer wheelbase and weight often results in under-steer and poor cornering, while its size may also be a factor in its moderate acceleration, and its top speed is also estimated to be moderate. So getting it to top speed and good acceleration takes longer than sports cars. Nevertheless, its superior size and weight allows the Washington to ram aside other sedans more easily.

The Grand Theft Auto IV rendition of the Washington performs largely the same as cars like the Admiral and the PMP 600. Acceleration is slightly below average and top speed is slightly below average, but makes up for its braking, which is very good. The suspension is very soft, designed to flatten out bumps in a road, not for high speed cornering, leaving the Washington fishtailing and spinning out of control when cornering at speed. Accident deformation is superb, making the Washington ideal for ramming vehicles. The engine build quality is also above average, and will sustain multiple direct impacts before smoking, or being set ablaze.

The car appears to be powered by a V8 engine, coupled to a 5-speed gearbox in a front engine, rear-wheel drive layout. It uses the same low-revving, smooth engine sound from luxury cars such as the Cognoscenti, the PMP 600 and the Admiral.

Again, the car appears to be powered by a V8 engine, coupled to a 5-speed gearbox in a front engine, rear-wheel drive layout. Its engine sound is generally low-revving and smooth, appearing to be similar, if not identical, to most standard sedans.

It can only be modified at TransFender. 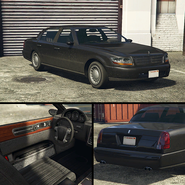 The Washington on the updated Rockstar Games Social Club.

Two unique black Washingtons may be seen driven by the French during the mission All Hands On Deck!, in GTA: Vice City. While it is possible to reach the cars and enter them, it is impossible to drive them (as the mission immediately ends and the car is lost). It is also impossible to push the cars to a garage as an alternative, as the player is only given a brief window of time before Juan Cortez is killed, leading to mission failure which warps the player back to the nearby mission trigger with the cars vanished. This variant is often confused as the FBI version, but closer inspections reveals that the details are completely different.

One of two black Washingtons featured during "All Hands On Deck!" in GTA Vice City. (Rear quarter view).

A Washington is requested as part of Stevie's Car Thefts. Unlike most vehicles in the side mission, the Washington appears with a black body color that is not unique, as many black Washingtons can be seen around Algonquin. The car will still spawn in the same location until is delivered.

The requested Washington in Stevie's Car Thefts in GTA IV.

This version cannot be recreated in Los Santos Customs as it sports a Classic Pure White primary and pearl color[2], and can spawn with any of the available extras (coffee cup holders, cigarette holder, etc). 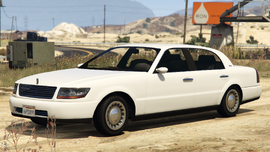