This mission crosses over with No Way on the Subway.

In-game time
“Where's my fucking stuff? You see, genius over here would rather get crème-brûléed before he dies. Hopefully, you ain't so stupid. Where's my stuff?”

Was It Worth It? is the penultimate storyline mission in The Lost and Damned. It is the last mission given by Ray Boccino (via Jim Fitzgerald's phone) to Johnny Klebitz. It is also the last mission to feature Jim, Ray and Ashley Butler.

In order to complete the mission the player must

Before Niko Bellic comes to Drusilla's to meet with Ray and leaves Drusilla's to chase the bikers, Jim will text Johnny telling him to meet him at Ray's. When Johnny gets there, he finds that Ray was the one who texted Johnny on Jim's phone. Jim is tied up and is being tortured by Ray's henchman in the basement of Drusilla's with a blow torch in order to reveal the location of the money Johnny ripped off. During the cutscene, Jim uses a hidden exacto-knife in his sleeve to cut the ropes binding his hands. He disarms Ray's henchman and holds the knife to his throat, ordering Ray to drop his gun. While the latter is distracted for a moment, Johnny kicks the gun out of Ray's hand to Jim. Johnny heads up the basement stairs. Jim cuts the throat of Ray's goon and they successfully escape. (Soon after, the events of No Way on the Subway begins here) Johnny heads to Ashley Butler's apartment while Jim rides over to an alley off Exeter Avenue in the hopes of finding some Lost MC brothers to back him up. When Johnny gets near her place, Ashley will call Johnny stating that Ray has sent some of his men after him.

The player must take out Ray's hitmen before they get Johnny. Johnny can fight them off on his own or call Clay Simons and Terry Thorpe for backup, they will say that they have set up an ambush at Keneckie Avenue. Therefore it is possible to lure Ray's men to the ambush and dispose of them. There are four waves if the player chooses this approach, with breaks in between.

After killing and surviving Ray's men, Johnny is told to meet up with Ashley at the Lost MC Clubhouse via cellphone. The player must go and meet Ashley. When Johnny arrives at the Lost MC Clubhouse Ashley is sitting outside, and reveals to him that Ray told her everything, including that one of his hitmen had killed Jim. She also informs Johnny that Billy Grey plans on turning states while in prison, pinning a drug ring on Klebitz and Angus Martin. After this Johnny cuts his ties with Ray.

The mission ends with Johnny telling Ashley "To get the fuck out of here!" after she admitted her love to him.

"Passengers on the subway between Algonquin and Dukes saw an unusual sight earlier - members of The Lost biker gang in a dramatic fight for their lives. The bikers entered the tunnel system in North Holland and sped along the tracks at high speed, weaving between oncoming trains and exchanging gunfire. An uncorfirmed witness reports that were three bikers involved in the chase. Two bodies have so far been recovered. One being identified as Jim Fitzgerald, a member of the Alderney chapter of The Lost. Police are struggling to identify the other one. Authorities are appealing to other members of The Lost and their rival biker club, the Angels of Death, for any information." 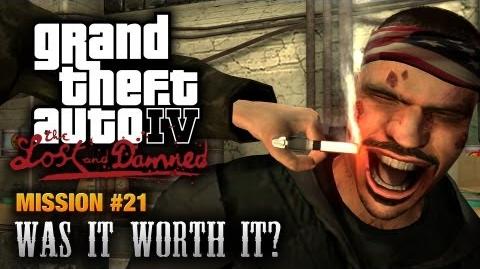